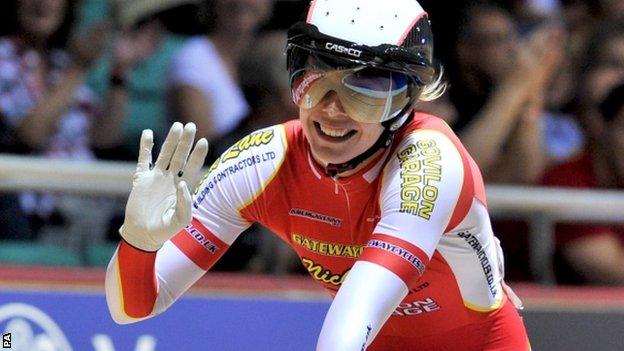 Becky James has taken a grip on an event once dominated by Victoria Pendleton by retaining the British women's sprint title.

The 20-year-old beat Victoria Williamson at the National Track Cycling Championships in Manchester.

Pendleton, women's sprint Olympic gold medallist in 2008, took the national title every year from 2002 to 2010.

But James, from Abergavenny, won it last year when Pendleton decided to focus on the team sprint.

Victory in Manchester secured James her second title of this year's national championship, as she won the 500m time trial event on Wednesday, in which she also beat Williamson.

She is due to take part in the team sprint with her sister Rachel on Saturday, before defending her British keirin title on Sunday.

James, a silver medallist for Wales in the women's sprint at the 2010 Commonwealth Games in Delhi, has been inspired by Pendleton, who won Olympic gold in the event in Beijing in 2008, and in the keirin in London before retiring in August.

With Britain's London Olympic cyclists not taking part in Manchester, this year's national championships have given promising hopefuls such as James and Williamson a chance to shine.

James had a difficult finish to 2011, as she was struck down by food poisoning following a Track Cycling World Cup meeting in Kazakhstan last November.

She then suffered an Achilles injury the following month and had to have her appendix removed in January after returning from a World Cup meeting in Beijing.

But she fought back to win a silver medal with Williamson in the team sprint and bronzes in the individual sprint and keirin at the European Under-23 Championships in Portugal in July.

James was not part of Great Britain's final Olympic squad, although she was reserve for the women's team sprint event, for which Pendleton and Jess Varnish were selected.

Meanwhile, Matt Crampton claimed gold in the men's keirin with a dramatic late run to beat rival Matt Rotherham to the line.

Mark Colbourne won his second title of the week with victory in the Paracycling individual pursuit, while Corinne Hall beat Charline Joiner and Hannah Barnes to take the women's points race title.