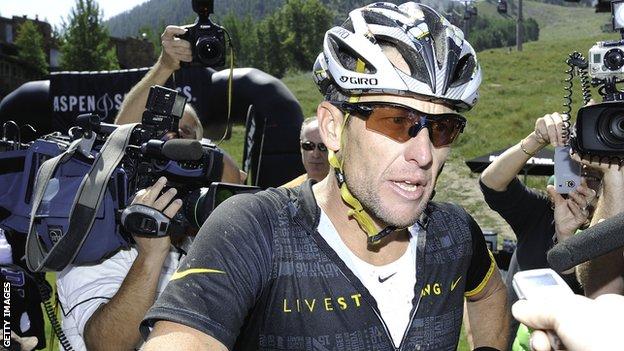 The long-awaited report into Lance Armstrong's lifetime ban from cycling should be sent to the sport's governing body, the UCI, by 15 October.

The UCI will then decide whether to ratify the decision to strip Armstrong of his seven Tour de France titles.

Armstrong was stripped of the wins and given a lifetime ban by Usada after deciding not to challenge charges he had doped throughout his career.

The 41-year-old has always denied the allegations of doping.

The American said he had decided not to contest the charges because .

Usada's Annie Skinner said her organisation was "in the process of finalising the written reasoned decision in its US Postal Services pro cycling doping case".

She added: "We will provide the reasoned decision addressing the lifetime bans and disqualifications imposed to the UCI and World Anti-Doping Agency as provided for under the world rules. We expect it to be sent no later than 15 October."

Cycling's governing body, the International Cycling Union, is awaiting the report before deciding whether or not to confirm Armstrong's ban.

UCI president Pat McQuaid admitted it was likely to be a case of rubberstamping Usada's decision though.

"Unless the Usada's decision and case file give serious reasons to do otherwise, the UCI has no intention to appeal to Court of Arbitration for Sport or not to recognise the Usada's sanctions on Lance Armstrong," he said.

"The UCI assumes that the decision and file will also detail the sanction the USADA may wish to enforce upon the riders who have provided testimony in exchange for reduced sanctions."