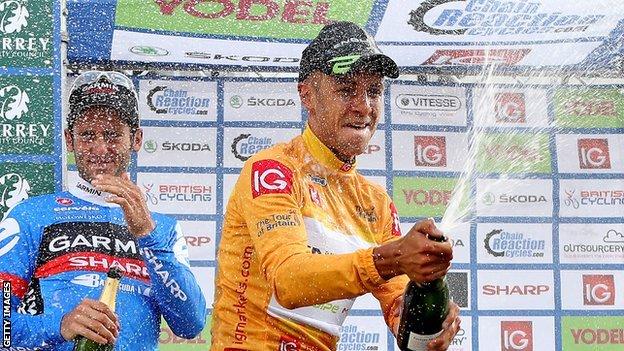 Jonathan Tiernan-Locke has become the first British rider to win the Tour of Britain in 19 years.

The Endura Racing star, who led by 18 seconds going into Sunday's final stage, finished in the main bunch to secure the overall race victory.

"It was my last day in the [world champion's] rainbow jersey and I wanted to finish it off in style," he said.

Cavendish, who became Britain's first road race world champion in more than 40 years when he won the title in Denmark last year, will defend his title in the Netherlands on Sunday.

The hilly Dutch terrain may not suit the sprinter, but he showed he is a decent climber on the final stage of the Tour of Britain, negotiating gradients of 20% to keep himself in contention to contest the final sprint.

The Manxman powered away from the field in the closing 200m.

Tiernan-Locke, who will join Cavendish in a nine-man British team at next week's World Championships, rode a sensible final stage, keeping himself out of trouble to become the first home winner of the race since Chris Lillywhite's Milk Race triumph in 1993.

"It's fantastic," said the 27-year-old, who has been linked with a move to Team Sky at the end of the season.

"It has not really sunk in yet. It was a tough day, a lot tougher than we thought. So I feel relief more than anything."

Peter Williams and Kristian House won the sprint and king of the mountains titles respectively, while Dutchman Boy van Poppel claimed the overall points jersey ahead of second-placed Cavendish.

Williams, who got himself in a four-man break on the final stage, won the three intermediate sprints to pick up nine points and finish on 45, almost twice as many as the second-placed rider, his Node 4 Giordana team-mate Marcin Bialoblocki.

The break was brought back 45km from the finish line on the fourth and final climb of the day, Barhatch Lane.

Australia's Jack Bobridge, among the quartet of escapees, tried to break clear again with 30km remaining but was unable to build an advantage of more than 30 seconds and was caught with 13km remaining.

Cavendish was roared to victory by thousands of fans.

"It was absolutely incredible," he said. "The amount of people out on the road has been like the Olympic Games. I thought I'd been forgotten about and everyone was about sideburns now."