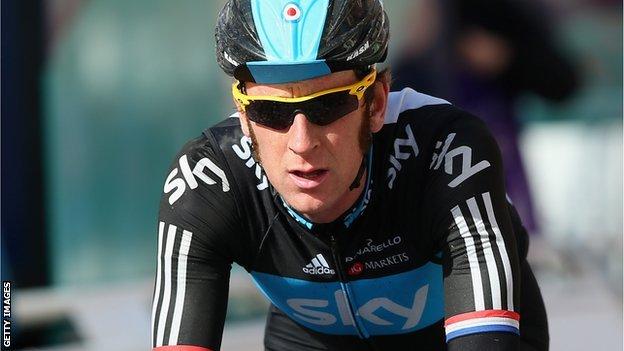 Olympic champion Bradley Wiggins pulled out of the Tour of Britain before stage six, which was won by Leopold Koenig.

A stomach bug prevented Team Sky's Wiggins, who also won the Tour de France, from starting the 189.6km stage from Welshpool to Caerphilly.

Fellow Briton Jonathan Tiernan-Locke finished second to move into a 13-second lead in the overall standings.

"I'm sorry I can't continue and would like to thank all those fans, of all ages, for the support," Wiggins said.

"I've loved the last six days. It's been a great experience but this bug sadly means I'll now miss the climax."

Overnight leader Leigh Howard, the Australian riding for Orica GreenEDGE, slipped to second in the general classification, while Nathan Haas climbed to third with his third-place finish.

EnduraRacing's Tiernan-Locke, who on Friday was named in the in the Netherlands, began the day in sixth, 24 seconds behind Howard.

However, he attacked on the first of two ascents of the category one Caerphilly Mountain late in the stage, reeling in what remained of a six-man breakaway.

Although he was joined - and beaten to the line - by Team NetApp's Koenig, Tiernan-Locke gained a six-second time bonus for finishing second.

Koenig, from the Czech Republic, said: "Before the race I targeted this stage. He is a strong rider in the climbs and I knew I had to follow his wheel."

Tiernan-Locke, 27, added: "This was always going to be the decisive day - it was a really tough one. [I am] just relieved to get across the line with a gap.

"A stage win would have been nice but I had some company. The overall [classification] is the main goal."

The Tour's penultimate stage takes the riders 170.7km from Barnstaple to Dartmouth on Saturday, a route which includes two category one climbs.

Tiernan-Locke, who was born in Plymouth, said: "I know the roads like the back of my hand. It will be a bit surreal wearing the [race leader's]gold jersey; we are going to try to not let it go."

Wiggins is set to compete alongside Tiernan-Locke at the World Championships, where Britain will attempt to help Mark Cavendish defend his world road race title on 23 September.