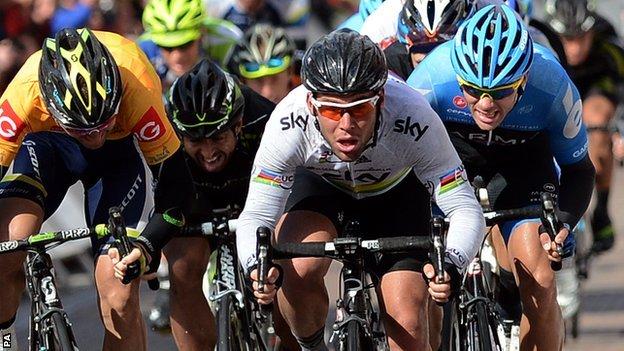 Mark Cavendish became overall leader of the Tour of Britain with victory in stage four, his second successive stage win.

The Manxman renewed his battle with Leigh Howard, outsprinting the Australian and his compatriot Steele von Hoff along Blackpool's Golden Mile.

Orica-GreenEDGE's Howard had beaten Cavendish to the line on stage two.

But, much as on Tuesday, Team Sky were able to set up Cavendish to win the soggy 156km stage from Carlisle.

In wet conditions in the north west, Team Sky and Orica GreenEDGE waited until 27km from the finish to lead a chasing group of 27 riders out of the peloton and set about closing the gap to IG's Dan Craven and An Post's Ronan McLaughlin, the remaining riders of an initial six-man breakaway.

By the time the pack emerged on to Blackpool's seafront, the Namibian and the Irishman had been successfully overhauled, with Bradley Wiggins setting the pace for Team Sky.

"After crashing on stage one, and getting a bit too cute with their lead-out on stage two, Team Sky have certainly found a winning formula now: set a steady tempo, slowly ramp it up, ask Wiggins to open the throttle and then just get out of Cavendish's way. It is a simple plan but brutally efficient and quite magnificent to behold. It is a shame it cannot work in Sky colours at bigger races than the Tour of Britain, but there are always the World Championships."

Cavendish said: "I'm really happy to have gone into the lead, and although I can't see myself keeping the jersey, we'd like to keep it in the team.

"On those last 5km along the front we just made it so fast that nobody else could get close to us.

"We'd expected a crosswind, but in the end it felt like a tailwind, and we were flying.

"Luke's [Rowe] going for the overall so we tried to let him get a bit of a gap like the other day, but then Leigh Howard jumped so I had to go with him, and then it was quite straightforward for me in the sprint."

Rapha Condor's British rider Kristian House, part of the early leading group, collected all the points on offer on the day's climbs to maintain his hold on the king of the mountains jersey.