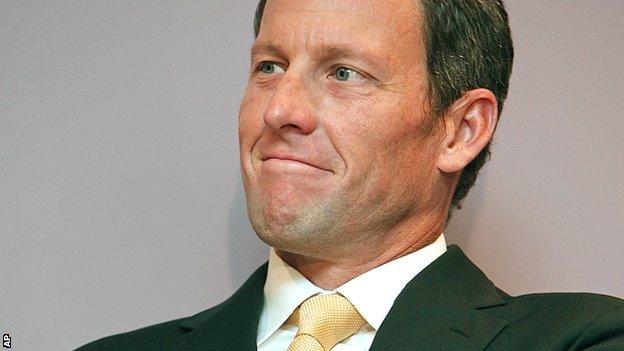 Lance Armstrong's bid to block an investigation into whether he took performance-enhancing drugs has been dismissed in a US federal court.

The seven-time Tour de France winner was charged by the US Anti-Doping Agency in June with using performance-enhancing drugs going back 16 years.

Armstrong, 40, subsequently took legal action against USADA, accusing it of offering "corrupt inducements" to other riders to testify against him.

The American has always denied doping.

The ruling of the Texas court means Armstrong must now face the doping charges and could lose his record-breaking seven Tour de France titles if found guilty.

He remarked upon the contrast between USADA's determination to pursue with the hearing "in direct conflict" with the "equally evident desire" of cycling's world governing body, the UCI, not to proceed against him.

Armstrong's alleged offences span 1999 to 2005. Should he choose to answer the charges, his case may ultimately be escalated to the Court of Arbitration for Sport.

He has previously accused the USADA, which has handed out lifetime bans to three of the five other men accused in his case, of pursuing a vendetta against him.

In a statement, the UCI said it had not been a party to the US proceedings and said it had proposed that an independent body should decide whether Armstrong had a case to answer or not.

Armstrong, who survived testicular cancer prior to his record-breaking Tour wins, retired after the 2005 Tour de France but made a comeback in 2009. He retired for a second time in February 2011.