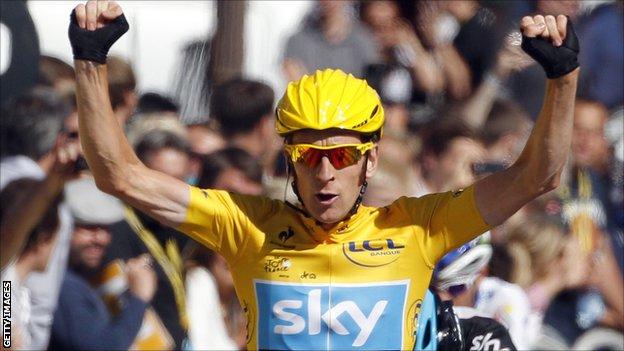 Wiggins, 32, finished with a winning margin of three minutes and 21 seconds after ending Sunday's race around the streets of Paris in the peloton.

Cavendish won the traditional sprint down the Champs Elysees with some ease.

The 27-year old from the Isle of Man is unbeaten in Paris, having also won on his three previous Tour finishes in 2009, 10 and 11.

He began his sprint early and held off the challenge of the faster-finishing Peter Sagan of Slovakia, with Australia's Matthew Goss third.

It lifted his tally of Tour de France stage wins to 23, to surpass seven-time Tour winner Lance Armstrong and Frenchman Andre Darrigade and move into fourth in the overall stage-win standings, 11 short of Belgian Eddy Merckx's record of 34.

But the day belonged to Wiggins, who safely negotiated himself around the streets of Paris, to complete the formalities after Saturday's stunning time-trial victory gave him an almost unassailable lead.

The three-time Olympic track champion crossed the line arms raised having helped set up Cavendish's sprint victory in front of thousands of British fans on the Champs Elysees, who had come to witness history being made.

"Bradley Wiggins has done something unbelievable by winning the Tour de France, but I know he will be the first to recognise that he would not have been able to achieve his victory without a terrific team behind him"

And in winning this year's Tour, Wiggins not only fulfilled a life-long ambition but also sealed his place in the pantheon of cycling greats.

"I'm still buzzing from the Champs Elysees, the laps go so quick. We had a mission with Cav and we did it. What a way to finish it off.

"I've got to get used to that [being a legend in the spotlight], it's going to take a while. I'm just trying to soak it all in. You never imagine it will happen to you but it's amazing."

In three demanding weeks, he toiled over the Alps and the Pyrenees to complete the mammoth 20-stage, 2,173-mile race which was in its 99th edition.

During his stunning transition from track to road racing, Wiggins finished fourth in the Tour in 2009 - equalling Robert Millar's 1984 British best - before crashing out with a broken collarbone when among the favourites in 2011.

But having worn the yellow jersey for 13 consecutive stages, Wiggins showed why Team Sky principal Dave Brailsford has placed so much faith in his man as he accumulated a winning margin of more than three minutes.

The margin of Wiggins' victory also answered many of those who questioned why Froome, who appeared marginally stronger in the mountains, was not Team Sky's Tour leader.

Team Sky themselves achieved the rare feat of a 1-2 on the podium, the first since 1996, when Dane Bjarne Riis finished ahead of his German team-mate at Telekom, Jan Ullrich.

It is also the first time compatriots have taken the first two places since France's Laurent Fignon finished ahead of five-time winner Bernard Hinault in the 1984 edition.

Frenchman Thomas Voeckler of Europcar won the polka dot jersey for the race's best climber, with Sagan of the Liquigas team easily securing the green jersey in the points competition.

American Tejay Van Garderen made up for BMC team leader Cadel Evans' disastrous title defence by winning the race's white jersey for the best-placed rider aged 25 and under.

Evans, who made history by becoming Australia's first champion in 2011, finished nearly 16 minutes behind Wiggins, although he did suffer with stomach problems during the final week.