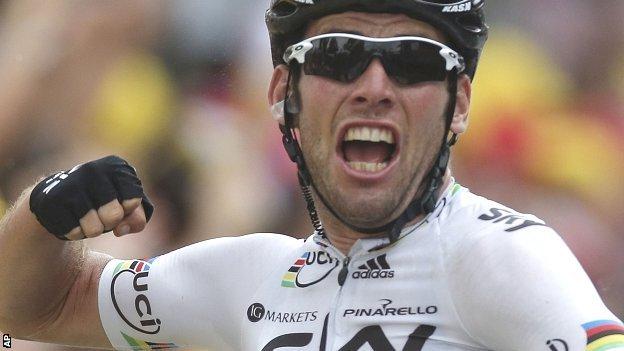 The Manxman has played a supporting role in Team Sky's bid to put Wiggins on top of the podium in Paris.

But the world champion claimed his second victory of this year's Tour on stage 18 as the peloton caught an escape group inside the final 1.5km.

Cavendish powered away in the final 500m to draw level with Lance Armstrong and Andre Darrigade in all-time wins.

"I just knew I was going to go for it," said the 27-year-old. "I have done nothing all Tour so I have saved so much energy.

"I knew I would be able to go from a long way out, and no-one would get past me today. I felt really good.

"It would have been easy for the guys to cruise into Paris and Sean [Yates, Team Sky's sporting director] was saying 'just take it easy' but I was pleading for a chance in the team meeting.

"But then Brad [Wiggins] said 'we are going to ride today' and Froomie [Chris Froome] committed to my cause and I'll always be grateful for that. We have got a great group of guys. It has been an emotional three weeks but I have enjoyed it."

There were no changes in the overall standings with Wiggins still two minutes and five seconds ahead of Team Sky team-mate Chris Froome.

Having come through the final mountain stage on Thursday with his position enhanced, Wiggins's priority for Friday's relatively flat 222.5km from Blagnac to Brive-la-Gaillarde was to stay out of trouble.

Given the Briton's ability in the time trial - he won the other in this year's Tour by 35 seconds from team-mate Froome - he can look forward to extending his advantage in Saturday's 53.5km contre la montre to Chartres.

Wiggins stayed near the front of the peloton for most of the stage as the main bunch chased down a 16-man breakaway that included Briton David Millar, winner of stage 12 a week ago, and Team Sky's Edvald Boasson Hagen.

Three riders - Alexandre Vinokorov, Adam Hansen and Luca Paolini - remained in front as the riders reached the outskirts of Brive, and were joined by three others - Andreas Kloden, Luis Leon Sanchez and Nicholas Roche - entering the final 5km.

The gap was down to eight seconds with 3km to go and Wiggins hit the front of the peloton with 1km to go, with Cavendish on his back wheel.

The Manxman went from a long way out, but easily out-sprinted Matt Goss and Peter Sagan.

"That was the best sprint I have seen from Mark Cavendish in years. For the first time since the beginning of the race, Team Sky gave him some help and he rewarded them for it by coming up with the goods. It has been a hard Tour for him and this will be a timely boost but I think he knew even before today that he was in good shape before the Olympics."

It is unusual for the man in the yellow jersey to act as a lead-out man but Wiggins said he was happy to help Cavendish clinch the stage win, in return for the work he has put in for his team at the Tour.

"Mark has waited a long time and been patient and he has got his reward," Wiggins explained. "He has had to put away his goals and make sacrifices on the Tour so far, and that is hard for a world champion.

"He has always been the first to say that the General Classification is the most important thing and we all wanted to repay him somehow."

Cavendish will have another opportunity for glory in Sunday's final stage, usually a processional finish into Paris until the Champs-Elysees, where the sprinters contest the stage win.

He is unbeaten on the French capital's famous boulevard, having won in 2009, 2010 and 2011 in the three Tours he has completed.