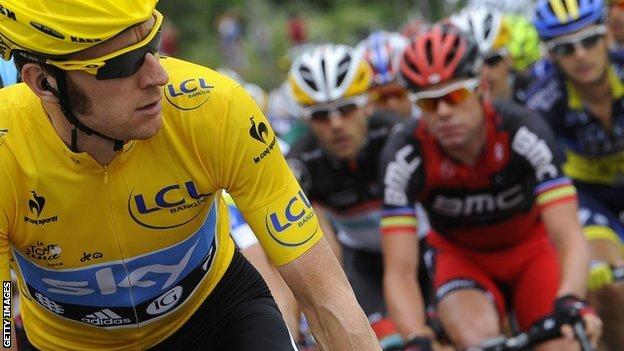 Race leader Bradley Wiggins will become the first Briton to wear the Tour de France's yellow jersey for a seventh time on Sunday after maintaining his advantage at the end of stage 13.

Wiggins will break Chris Boardman's record after finishing in the peloton in Le Cap d'Agde on Bastille Day.

"The team did a great job for me," Greipel said. "You can be really happy with one victory in the Tour de France, but this is a bit special because of Mont Saint-Clair being there near the finish."

Wiggins led his Team Sky colleague Edvald Boasson Hagen into the finishing straight of the 217km route from Saint-Paul-Trois-Chateaux.

As Wiggins tailed away, Boasson Hagen pulled ahead before Greipel and Sagan sprinted ahead to the line.

"Once we knew that Mark Cavendish wasn't going to come back, everybody said we'd try to do the job for Edvald," said Wiggins.

"Sometimes it's just good to get on the front and try to repay a friend of mine back."

Greipel's win followed his victories on stages four and five and draws him level with Sagan, who has also crossed the line first in three stages this year.

Sagan picked up 35 points for finishing second to take his overall tally to 296 points, 64 clear of Greipel who amassed 45 for winning the stage.

Team Sky had their easiest day in more than a week. The teams of Lotto and Orica GreenEdge set the pace on the peloton and Team Sky only really needed to be vigilant in the final 25km. I thought Cavendish may have done a little better up that climb, particularly as Greipel stayed in contention, although it's nowhere near as tough as Box Hill will be in the Olympic road race.

Danish rider Michael Morkov went on the attack in the opening kilometres of the stage after telling reporters that he was aiming to win the stage in memory of his father who passed away five years ago to the day.

He helped a group of eight riders, which unsurprisingly included five Frenchmen on Bastille Day, build up an advantage of more than nine minutes but, with the peloton closing that down, he sped off on his own with 65km remaining, battling crosswinds that split the bunch behind him.

However, he was caught 25km from the finish on the solitary climb of the day, the deceptively tough 1.6km ride up Mont Saint-Clair, as Cadel Evans and Jurgen van den Broeck attacked Wiggins.

The Brit was well supported by Mick Rogers and Froome though and the trio kept a consistent pace, catching Evans and Van den Broeck as they reached the summit.

"Bradley never looked to be in any danger, the important thing today was to be at the front," said Team Sky principal Dave Brailsford.

"This stage is another box ticked. It was a really niggly and hard day but we have come through unscathed."

Cross winds and small roads today; even the classics riders said it was a stressful day. Certainly had some dangerous moments

Fellow Team Sky rider Cavendish, who has won one stage on this year's Tour, did not fare so well on the climb, losing more than one minute to the leaders, ending his hopes of contesting the sprint to the finish.

Sunday's stage will see the riders head into the Pyrenees for a 191km race from Limoux to Foix.

Wiggins is aiming to become the first Briton to win the famous race, which finishes in Paris on 22 July.