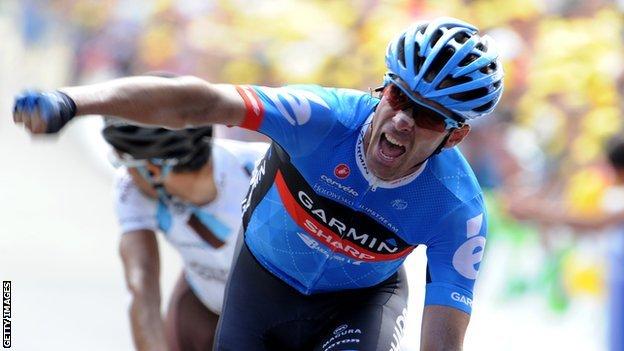 Millar, who was in a five-man breakaway on the 226km race from Saint-Jean-de-Maurienne to Annonay Davezieux, beat Jean-Christopher Peraud in a sprint.

The victory was the fourth by a Briton on this year's Tour after wins for Mark Cavendish, Chris Froome and Wiggins.

Team Sky's Wiggins finished in the peloton and leads by just over two minutes from team-mate Chris Froome.

Wiggins is aiming to become the first Briton to win the famous race.

Garmin rider Millar won the prologue on his Tour debut 12 years ago and last won a stage nine years ago.

The 35-year-old Scot said: "I was determined. As soon as I got in the break I had in my head I was going to win. I just gave myself no options and was going to do whatever it took [to win the stage].

"It's particlarly poignant as an ex-doper [to win on the anniversary of former British rider Tom Simpson's death].

"I'm proud to have done it today because we mustn't forget Tommy's memory and what we've been through as a sport.

Wiggins enjoyed a more relaxed day in the peloton as Team Sky controlled the pace but chose not to chase down the escapees.

And he was quick to praise the efforts of Millar, who will be a Team GB team-mate in the London Olympic road race in a couple of weeks.

"Dave was beginning to feel a bit left out so it's incredible for him to get up the road and win on such an anniversary," said Wiggins.

"Dave's been on the comeback most of the season [after breaking his collarbone] so to top it off with a stage win on Tom's [Simpson] anniversary is incredible."

However, Wiggins did reveal that he had a nasty moment on the final climb of the day.

"I'm covered in yellow stuff and got a bit of a burn on my arm," he said. "It was some nutter running up the hill with a flare and it shows you freak things like that can happen in the Tour. I'm fine though."

It was a tremendous piece of riding by Millar on the longest stage of this year's race.

He was involved in the first escape attempt of the day in the opening kilometres and stayed away over the two category-one mountain climbs when many other riders fell back into the peloton.

After descending the second mountain, Millar, Robert Kiserlovski, Egoi Martinez, Peraud and Cyril Gautier were allowed by the peloton to open up a lead of more than 12 minutes as none of the riders are in contention to win the race.

This Tour so far has been unbelievable from a British point of view. I don't think anyone could have expected to see such success with four different stage winners. It's been a while since Millar won a stage but today it was down to his experience and using his head. Team Sky had as easy a day as they could possibly have wanted and they will be happy with how it all went.

The quintet rode well together until the final 3km when Peraud and Kiserlovski tried to attack but Millar covered them with some ease.

Peraud attacked again in the closing couple of hundred metres but Millar responded and kicked again to win by a couple of bike lengths.

The result means all four of Britain's Olympic road race riders in the Tour de France have now won a stage in this year's race.

Saturday's 13th stage is a 217km race from Saint-Paul-Trois-Chateaux to Le Cap d'Agde on the Mediterranean coast.