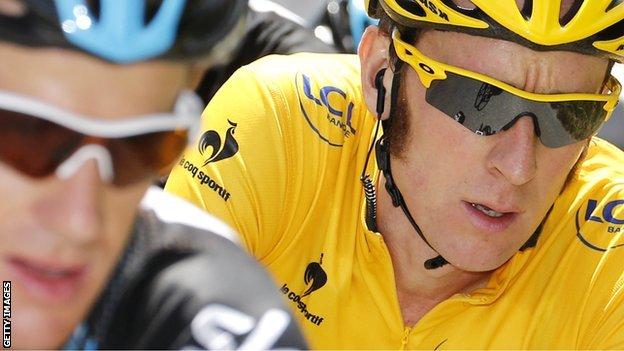 British riders Bradley Wiggins and Chris Froome occupy the top two places in the Tour de France after an excellent day for Team Sky on stage 11.

Wiggins leads by just over two minutes from team-mate Froome after defending champion Cadel Evans cracked on the final climb to slip to fourth.

Vincenzo Nibali, who attacked on the ascent to La Toussuire but was hauled in by Sky, climbed to third overall.

The stage was won by Pierre Rolland, the last survivor of an early attack.

"I'd been dreaming about this stage for six months," said Rolland, who became the second successive French stage winner after Thomas Voeckler's victory on Wednesday.

"My second victory in the Alps in two years - I don't have the words to describe the feeling."

Wiggins admitted feeling a sense of relief after keeping hold of the yellow jersey on a punishing day in the mountains that saw the riders negotiate two hors categorie climbs and an 18km ride to the summit finish.

"When we got to the last climb, with about 5km to go, the relief started to come that we were almost at the finish," said Wiggins.

"Once Cadel had got dropped and we were in that little group, the sense of relief was slightly overwhelming that we've actually got through the stage.

"And to have taken more time off Cadel, which I don't think we really expected this morning."

Sky were happy to let a large group of more than 20 riders, including Rolland, go clear early on as it did not contain any contenders for the overall lead.

Behind the escapees however, the British-based team fought off several attacks by contenders for the yellow jersey on a gripping day's racing over 148km between Albertville and La Toussuire.

Several of the riders lying behind Wiggins in the general classification had promised to attack, and defending champion Evans knew he had to take time out of the Sky man, who is a superior time trialler, in the mountains if he is to successfully defend his title.

And the Australian was first to try his luck, launching an attack with just over 62km remaining on the second of the hors categorie climbs, the Col de la Croix de Fer.

He linked up with BMC team-mate Tejay van Garderen but, with Sky's Michael Rogers maintaining a good tempo on the front, the pair were never able to gain more than 20 seconds and were reeled in after only a few kilometres.

It was the last danger posed by Evans and it was Nibali who ended up being the biggest threat on the day.

The Liquigas rider attacked early on the final climb, joining a breakaway that also included the highly-placed Van den Broeck.

Sky workhorses Rogers and then Richie Porte fell by the wayside as they tried to lead Wiggins back to his rivals, and it was left to Froome to protect his leader.

The Kenyan-born Briton duly dragged Wiggins back to Nibali and Jurgen Van den Broeck, dropping Evans in the process.

Froome even attacked and dropped the others, but when Wiggins immediately floundered he was instructed over the team radio to slow his pace and the group reformed.

"At that moment I was just really concentrating on my effort and keeping it constant," explained Wiggins. "I'd been riding [very hard] for 1.5km, 2km before that. I just wanted to clear the lactate and didn't want to make any more of an acceleration.

"There was a lot of noise and a lot of things going on on the radio and a bit of confusion at that point as to what we were doing.

"In the morning we'd certainly spoken about Chris attacking in the final and maybe making up those 20-odd seconds to move into second overall.

"The plan this morning was for me to stay with Vincenzo and those guys, as long as Chris didn't drag them away."

Rolland, who crashed on a descent earlier in the race, held on to win, with Froome edged out by Thibaut Pinot for second, 55 seconds back, while Wiggins crossed the line with Nibali, a further two seconds behind in sixth.

Wiggins is two minutes and five seconds ahead of Froome, with Italian Nibali a further 18 seconds back in third.

Australia's Evans is now three minutes and 19 seconds behind the leader, while Belgium's van den Broeck has climbed into the top five but is nearly five minutes off the pace.

The race stays in the Alps on Friday with a 226km ride from Saint-Jean-De-Maurienne to Annonay Davezieux.