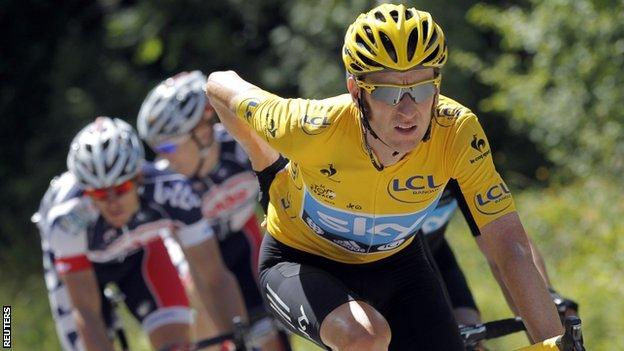 Bradley Wiggins says he deserves to be leading the Tour de France and put his success down to hard work.

Wiggins, 32, was again asked questions about doping as he retained his overall lead of the Tour after the first day in the Alps.

The Team Sky rider said: "There's one reason why I'm in this position and that's because I've worked hard.

"I deserve every minute of what I've been through this last week or so. I shouldn't have to justify it."

Wiggins is the first Briton to wear the yellow jersey for four days in one Tour, beating the previous best of three days set by Chris Boardman in 1994 and David Millar in 2000.

He has won the Paris-Nice, Criterium du Dauphine and Tour de Romandie stage races to establish himself as a favourite for the Tour de France.

Wiggins holds a near two-minute lead over 2011 winner Cadel Evans, but has become increasingly frustrated at having to respond to questions over doping.

Wiggins reacted angrily on Sunday when asked for his response to critics who say riders must take drugs to win and he was asked again after Wednesday's stage.

"I don't expect Team Sky's strategy to change when the race goes into the Alps this week. The time Wiggins has got on his rivals means he can concentrate on conserving that lead, especially with another time trial to come in the penultimate stage of the race on 21 July."

Tour a triumph for British cycling

"It's not like I've just come from nowhere," Wiggins said.

"I've been three times Olympic champion on the track; people have to realise what kind of engine you need to win an Olympic gold medal as an individual pursuiter.

Helped by his Team Sky colleagues, Wiggins made light work of the 17.4km climb to the 1,501m-high summit of Col du Grand Colombier on Wednesday, which was expected to shake up the top of the General Classification.

One of Wiggins' rivals for the overall win, Vincenzo Nibali, was allowed to make a breakaway by Team Sky but was eventually caught and remains in fourth in the general classification.

The Italian was unhappy with a gesture from Wiggins as the duo crossed the line together.

Nibali said: "At the moment they (Team Sky) are really, really good.

"After the finish line, Wiggins made a gesture with his hand. He should not lack respect for his rivals.

"In cycling, riders have always shown a great respect towards each other. We are not footballers."