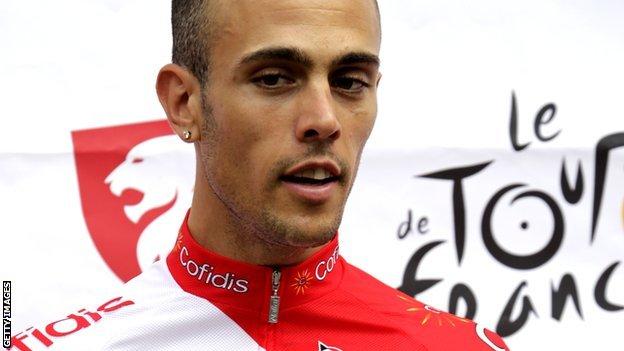 Tour de France team Cofidis have suspended French rider Remy di Gregorio after learning that he may have tried to use banned substances.

Matt SlaterBBC sports news reporter
This news has come at the worst time for cycling. The sport is almost certainly cleaner than it has been for a very long time, which is why Britain's Bradley Wiggins reacted in such colourful fashion on Sunday to rumours about his own rise to prominence. But with Di Gregorio in the dock, Alberto Contador absent, the Europcar team riding under a cloud of suspicion and Lance Armstrong fighting for his reputation, it is easy to see why these rumours will not go away

Cofidis have announced an investigation following reports the 26-year-old has been taken by police for questioning in relation to the alleged offences.

Di Gregorio was 35th in the 2012 Tour standings after Monday's ninth stage.

"Suspicions about the rider... lead us to apply strict and immediate sanctions," a team statement read.

Di Gregorio has been racing in the Tour since 2005 and appeared for the La Francaise des Jeux team for six years before joining Astana for 2011 then Cofidis for 2012.

His best finish this season was 15th in the fourth stage to Rouen, though he came 114th in Monday's time trial to Besancon, 18 minutes and seven seconds behind race leader Bradley Wiggins.

The Marseille native has reportedly been taken to a police station in the city and a media conference is scheduled at the team hotel around 17:00 BST on Tuesday.

"We have just learned that one of our riders on the Tour de France may have tried to use banned substances to improve his performance," French team Cofidis said in a statement.

The French team confirmed that, once they establish the facts, the matter "will be dealt with as specified by the terms of the contract and the ethics policy of the team".

The Tour de France has a history of doping allegations, with the latest controversy seeing seven-time winner Lance Armstrong formally charged with using performance-enhancing drugs by the US Anti-Doping Agency.

On Monday Team Sky backed their rider Bradley Wiggins, who is in possession of the 2012 Tour's yellow jersey, after the 32-year-old reacted angrily to allegations made on social media about Tour winners needing performance-enhancing drugs to win.