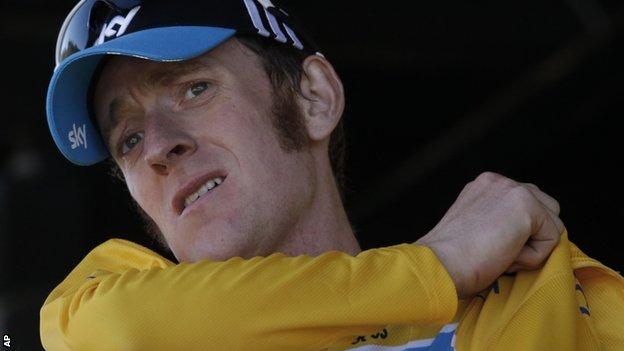 Team Sky principal Dave Brailsford has backed Bradley Wiggins after his expletive-laden reply to a question about drugs and the Tour de France.

Britain's Wiggins, asked for his response to critics on Twitter who say riders must take drugs to win, swore four times in his answer.

He was speaking after retaining the yellow jersey on stage eight.

"I totally agree with the sentiment and I like the passion, I back him 100%," Brailsford said.

"The guy's just got off his bike after a very, very hard six-hour stage. He's stuffed, he comes in and then he gets asked if he's cheating," said Brailsford.

"There may be a few choice words language-wise that you could change but, apart from that, the sentiment was spot-on as far as I'm concerned and there is no issue whatsoever for me."

"It's easy for them to sit under a pseudonym on Twitter, rather than get on in their own lives and apply themselves and work hard at something and achieve something."

The Tour de France has a history of doping allegations, with the latest controversy seeing seven-time winner Lance Armstrong formally charged with using performance-enhancing drugs by the US Anti-Doping Agency.

Team-mate Mark Cavendish also backed Wiggins on Twitter: "Good on [Wiggins] for an honest answer in Sunday's press conference, aimed at people who know nothing better than to be sceptical."