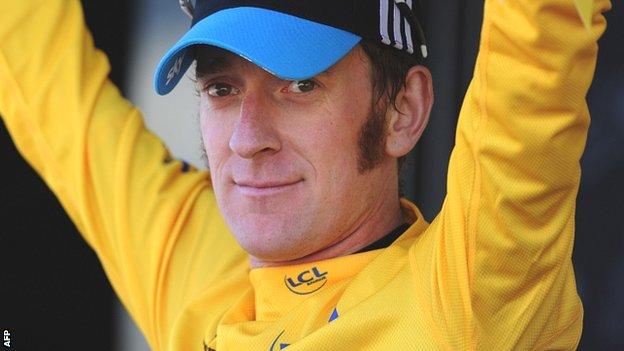 Wiggins and team-mates Richie Porte and Chris Froome ramped up the pressure in the final 5km with 2011 winner Cadel Evans sticking stubbornly with them.

Briton Froome broke clear in the last 200m to win stage seven, with Evans and Wiggins finishing two seconds back.

Wiggins holds a 10 seconds lead over Evans in the overall standings.

You can't choose when you take the yellow. There's another tough day tomorrow then we've got the time trial and a rest day and we're halfway through the Tour. We'll defend it every day

"It is an amazing feeling," said the 32-year-old, who justified his pre-race favourite tag with a solid ride to the finish. "It just went perfectly for us, the boys put it on the line and did a fantastic job.

"'Froomie' was mind-blowing - he is just going from strength to strength as a bike rider - and we got the yellow jersey so it is fantastic.

"This is what we have been training for all year, and I think it is fair to say we have peaked now.

"We are in the driving seat and we will look to consolidate in the coming days, more so in the time-trial [on Monday].

"Cadel is hot on our heels so it's not something we're going to accidentally try and lose to him.

"It is not over but with everything that is to come, just to be in the yellow jersey is something to be savoured. It is a childhood dream of mine.

"I'd sit on the home trainer watching my hero, my Tour de France hero, Miguel Indurain."

He was seven seconds behind Fabian Cancellara who had led since the opening prologue seven days ago, however, the Swiss time trial specialist was not expected to keep pace with the main contenders and he duly dropped away on the final climb, a 5.9km category one ascent.

Seven riders who had broken clear just 15km into the stage were soon hoovered up as Australian Porte set a blistering pace up the mountain to split the peloton wide open, dropping established climbers such as Russia's Denis Menchov and Spain's Samuel Sanchez.

That stage could not have gone any better for Team Sky and Bradley Wiggins. It was a tremendous all-round team performance and an important psychological blow because Evans's team evaporated. That will give Wiggins tremendous confidence in his team for future days. It was an excellent ride by Froome as well, to have the power to ride away from Evans on such a steep gradient.

Pacemaker Porte eventually dropped away with 2km remaining, leaving 27-year-old Froome, who finished fourth behind Wiggins at this year's Dauphine, at the front.

Wiggins continued to be paced up the mountain with Evans, Vincenzo Nibali and Rein Taaramae also in the hunt for the stage win.

Evans attacked on a flat section near the summit but Wiggins followed and Froome launched a counter-attack on the 20% gradient 500m from the line before riding away for an unexpected victory while Wiggins followed the Australian over the line to take the race lead.

Kenyan-born Froome, who finished second at last year's Vuelta a Espana, one place ahead of Wiggins, also collected 20 points in the king of the mountains race and will wear the polka dot jersey on Sunday.

"It's a dream come true, I never thought of winning the stage, I'm chuffed to bits," said an elated Froome, who grew up in South Africa and has only ridden for Britain since 2008.

"From the start we were controlling the race. The guys did a fantastic job, Richie [Porte] set a blistering pace [up the final climb] and got rid of a lot of guys.

"It wasn't the plan to go for the stage but I'd seen the finish before and I thought 'I've got the legs' and I gave it a small nudge. I couldn't believe it when Cadel didn't follow. And having Brad two seconds behind, we couldn't ask for more."

Sunday's stage eight features seven categorised climbs as the riders race 158km from Belfort to Porrentruy in Switzerland. The final climb of the day is the category one Col de la Froix, although the race does not finish at its summit.