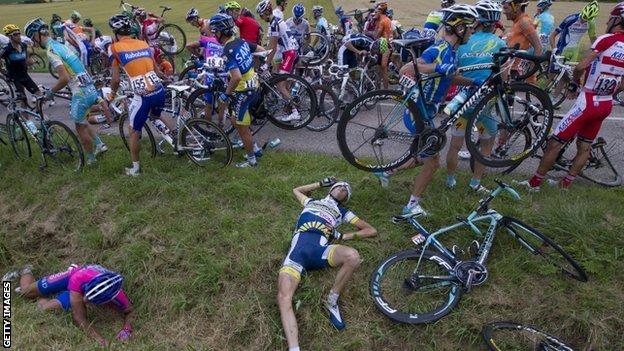 Slovakian Peter Sagan sprinted to a third Tour de France stage win after a huge crash on the run-in to Metz.

The Liquigas rider powered past Andre Greipel, who was injured in an earlier crash on stage six, to deny the German a third straight victory in the race.

However, the Swiss rider revealed that he had been close to being caught up in the third crash of the day on the outskirts of Metz.

The peloton was comfortably chasing down a four-rider breakaway when a crash scattered dozens of riders into the grass verges and on to the tarmac.

"Bradley Wiggins will be very happy to have got through the first week unscathed and that he and Cadel Evans are going into the mountains on an equal footing. David Millar's Garmin team had four riders in the crash but, providing they're not badly hurt they've just got to get on with it."

"Right next to me I had Davide Vigano and I could feel it when he went down," said Cancellara.

"I had to put one leg on the ground and was just happy not to go down."

Britain's David Millar, who was last week selected to ride in the Olympic road race team, was one of the men caught up in the accident.

He tweeted: "Oh sweet Jesus that was scary. Approx 70km/h pile up, like a tidal wave of debris smashing towards us, could do nothing but brake and pray.

The 35-year-old Scot later added: "It was the scariest crash I've ever been in.

"God knows how it happened - some idiot. It shouldn't happen like that. Once it started happening we didn't even have a chance to really brake.

"I started landing on guys, but bikes were hitting me, chain rings going up and over me and getting tangled up."

Luxembourger Schleck and Canadian Hesjedal were the biggest losers among the overall contenders as a result of the crash.

Schleck, who finished third last year, finished in a group that lost more than two minutes to defending champion Evans and Wiggins.

Hesjedal, winner of the first of this year's Grand Tour races, the Giro d'Italia, came home alongside Garmin team-mate Millar, but more than 13 minutes down.

Another of Hesjedal's team-mates, American David Zabriskie, who led the four-man breakaway, said: "Hesjedal looks like he's got a haematoma at the top of his leg. We'll see what the doctors say about that."

Race officials later confirmed four riders have dropped out of the Tour as a result of injuries suffered in the crash. Dutchman Wouter Poels of Vacansoleil, American Tom Danielson of Garmin, Italian Davide Vigano of Lampre and Spaniard Mikel Astarloza, who rides for Euskaltel, brought the number of retirements from this year's Tour to eight.

Later, three-times world champion and former Tour green jersey winner Oscar Freire also abandoned the Tour. The Spaniard, who rides for Katusha, broke a rib and perforated a lung in the crash and will spend at least three days in hospital, making him a doubt for the Olympic road race on 28 July.

The accident also ended Cavendish's hopes of contesting the sprint for Team Sky on Friday. He tweeted: "Lucky to just miss two flying bikes in today's massive crash, but punctured just to be part of the chaos."

Team Sky principal Dave Brailsford conceded that Cavendish's morale may be low after missing out on another sprint, but he praised his team directors for prioritising Wiggins.

"It's hard for Mark in those situations," said Brailsford. "Maybe in previous teams the whole team would have stopped immediately and taken him up.

"There were some tough calls for the sports directors, but ultimately Brad was in that front group and lost no time.

"When you saw Frank Schleck, [Michele] Scarponi, [Robert] Gesink and Hesjedal all caught up in that crash, you've got to say it was a good day."

Briton Wiggins and Evans both stayed out of trouble and came home in the main bunch four seconds behind the sprinters.

Greipel, who began the day aiming to become the first rider since Lance Armstrong in 2004 to win three successive stages, had not been expected to contest the sprint after injuring his shoulder in the opening crash of the day just 35km into the 207km stage.

However, with the depleted peloton missing some of its biggest names, the Lotto riders set him up to challenge, but Sagan waited until the final moment to spring out of Greipel's slipstream and take the win.

Saturday's seventh stage will see the riders head into the Vosges hills for a 199km race from Tomblaine to a new summit finish at La Planche des Belles Filles.