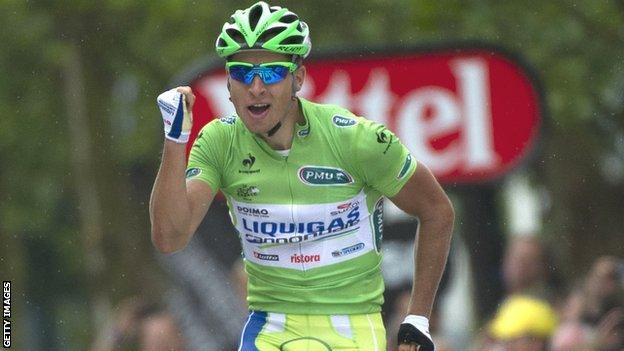 Peter Sagan followed up his first-stage victory on Sunday by winning the third stage of the Tour de France from Orchies to Boulogne-sur-Mer.

The Liquigas rider eased home in the final 100m to claim the 197km stage, which was marred by several crashes.

Team Sky's Kanstantsin Siutsou broke his leg in a crash and team-mate Bradley Wiggins was held up by another.

But the Briton did not lose any time and remains second overall, seven seconds behind Fabian Cancellara.

Two stages is good for me and I want the green jersey in Paris now. That's my objective

"It was tight at the end, with so many small, narrow roads," said Cancellara. "The team did a great job, but Sagan was just too quick.

"I'm happy to get through the stage without crashes and we have the yellow jersey. Wednesday is a sprint day so I hope I can defend the jersey."

Tuesday's 197km stage, which featured six categorised climbs, saw a number of crashes - one of which severely dented Wiggins' hopes of becoming the first Briton to win the yellow jersey.

The Olympic champion's Team Sky team-mate Siutsou was involved in a crash with 50km to go, forcing the Belarusian's withdrawal, the first of the tour. Sky later confirmed he had fractured his left tibia.

That means Wiggins has just six riders to support his title bid, excluding Mark Cavendish and Bernard Eisel who are unlikely to be in a position to help him towards the end of the three-week event.

"It's a setback, but not a devastating setback," said Team Sky principal Dave Brailsford. "He'a a very good climber so he can do that first part in the key mountain stages. But to be honest the climbing department, as it were, is probably where we're at our strongest.

"We've seen Peter Sagan so many times this year already with the amount of victories he has had. He came to the Tour as a man talked about as a real star of the future. There are no limits to what he can achieve and he's proving it already. He's the second youngest rider in the race. He's performing well and you'd hardly bet against him winning more stages and maybe even that green jersey."

"It's a real shame, but not the end of the world. It's like boxing - as long as you're still fighting you can knock the other fella out. That's the approach you've got to take to it."

Wiggins crossed the line around 30 seconds behind winner Sagan, but was awarded the same time because he was held up in a crash that occurred in the last 3km.

Katusha's Giampaolo Caruso suffered injuries when he fell while Australian champion Simon Gerrans of Orica-GreenEdge was flung over his handlebars and into a fence after he hit a bike lying on the ground.

Polka dot jersey holder Michael Morkov was involved in a breakaway for the third time in as many stages when he went clear with Andriy Grivko, Giovanni Bernaudeau, Ruben Perez and Sebastien Minard.

The five men got picked off by the bunch, with Grivko holding out until 7km to the finish, before Frenchman Sylvain Chavanel launched an attack of his own on the descent of the penultimate climb.

But the Frenchman ran out of steam and was caught by a fast moving peloton, with Wiggins, reigning champion Cadel Evans and Sagan all in contention.

A crash within sight of the line saw Wiggins get trapped as a group of 20 riders went clear and it was Sagan, making his Tour debut, who pushed clear for victory.

"Two stages is good for me and I want the green jersey in Paris now," said Sagan. "That's my objective."

Team Sky's Edvald Boasson Hagen finished one second behind in second place, with Peter Velits of Omega Pharma-QuickStep completing the top three and Evans in sixth.

Wednesday's fourth stage is a 214km ride from Abbeville to Rouen.