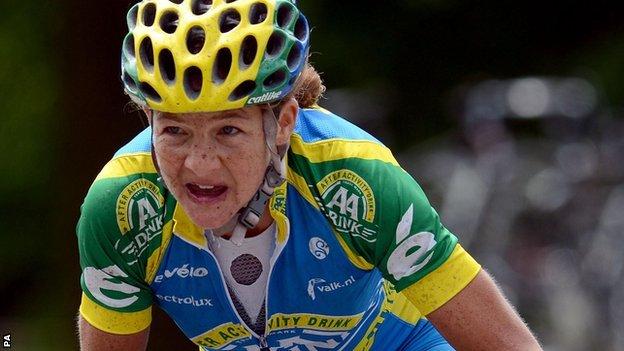 Sharon Laws, who failed to make the Great Britain team for this summer's Olympics, has taken the British Championships title in Ampleforth.

The 37-year-old beat off the challenge of Lizzie Armitstead and Emma Pooley, who were both named in Team GB.

"I just wanted to prove something today," said Laws.

In the men's race Ian Stannard finished first ahead of Ben Swift and Jeremy Hunt with the trio vying for an Olympic place.

"I just think I'm one of the strongest riders and I wanted to show that," added Laws.

"I understand why the decision has been made, but I still think I could play a really good role in the race. I think I'm worthy of a place on the team."

Armitstead, who won the race in 2011, and Pooley, the 2010 champion, came second and third respectively.

Olympic champion Nicole Cooke, who was also named in the British squad finished sixth, more than nine minutes behind Laws, while Lucy Martin, who secured the final London 2012 berth, did not finish.

With Bradley Wiggins, Mark Cavendish and Geraint Thomas all missing the men's event, Stannard took advantage to press home his claim for a place in the team for this summer's Games.

"It's nice to win nationals," said the 25-year-old. "Some great guys have worn the jersey.

"It will be nice to wear it in the classics next year and hopefully represent it well."

Stannard, Swift, who was fourth, and Hunt, fifth, are all vying for a place in the five-man Olympic team which is expected to be confirmed this week.