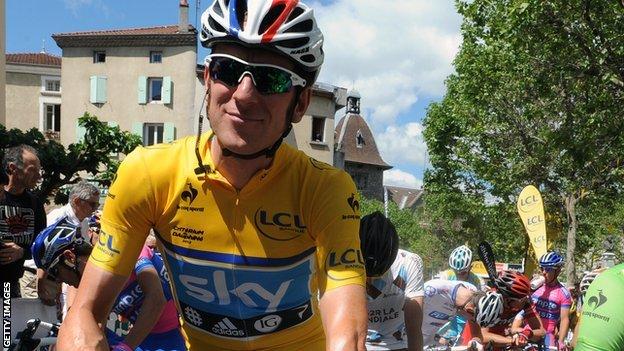 Bradley Wiggins will lead the Team Sky squad for the 99th Tour de France, which starts on 30 June.

Three-time Olympic track champion Wiggins crashed out of last year's Tour when he broke his collarbone.

The 32-year-old will be attempting to become the first British rider to win cycling's most famous event.

"I'm really proud to be part of such a strong unit going into the Tour de France," he said.

"The team's preparation has been perfectly managed and our form this season gives us a great chance of being successful.

"I've been waiting for this moment for a long time and I'll do everything I can to win the Tour de France."

Cavendish, a winner of 20 stages over the last four Tours, says he is prepared to sacrifice his own prospects of success for the goal of Wiggins winning the yellow jersey.

"I know the push for the General Classification podium will make it more difficult for me to repeat the success I've enjoyed the last few years.

"But I'll compete and - as always - I'll dedicate myself to making it a successful Tour for Team Sky and, let's hope, for Britain."

Team Sky's third British rider is Chris Froome, who will compete in his second Tour de France. A strong climber, the 27-year-old was second in the 2011 Vuelta a Espana, and he recently helped Wiggins in his Tour de Romanie and Criterium du Dauphine successes.