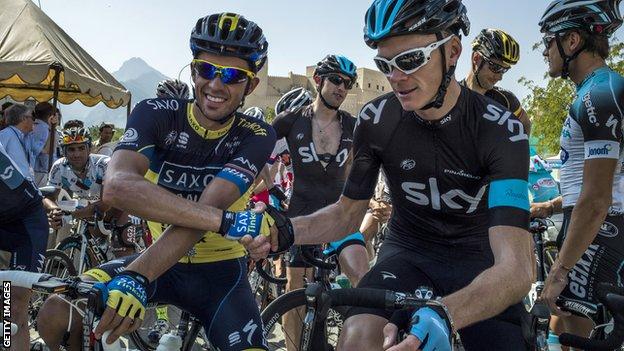 The 101st edition of the Tour de France begins in Yorkshire with Chris Froome aiming to become the first British rider to win the race for a second time.

Team Sky rider Froome will renew his rivalry with Spain's Tinkoff-Saxo racer Alberto Contador in the prestigious three-week race, while Italy's Vincenzo Nibali is also among the favourites

British sprinter Mark Cavendish will attempt to regain the green points jersey he last won in 2011. Slovakia's Peter Sagan, who has won the title for the last two years, and German duo Andre Greipel and Marcel Kittel are likely to provide the main competition.

The Tour has seen some magical moments - sprinkled with plenty of controversial ones - throughout its 110-year history.

A is for Armstrong. Once held up as a legend of the sport, Lance Armstrong finally confessed to doping in January 2013 in the wake of being stripped of seven Tour de France titles that he won between 1999 and 2005. The American, who survived testicular cancer before embarking on his winning streak, had previously maintained his innocence, pointing out he had never tested positive for performance-enhancing substances.

B is for broom wagon. First introduced in 1910, the vehicle, which did at one time carry a broom, follows the race collecting stragglers or those who fail to make it to the finish in the permitted time.

C is for caravan. Created in 1930 for sponsors to advertise their wares, the publicity caravan also lets spectators know the riders are on their way. It is now an integral part of the race, taking 45 minutes to pass through each village and town en route. The procession of multi-coloured floats, sponsored by a wide variety of companies, doles out a multitude of free gifts. A recent survey revealed that 39% of spectators were drawn to the Tour first and foremost by the procession.

D is for domestique. The servants of the team who race for their team leader. It is virtually impossible for a rider to win the race without the help of his team-mates. The domestiques fetch and carry food and drink, ride at the front to provide a slipstream and protection from winds. They also act as pacemakers should their team leader crash or struggle on a climb.

E is for Etape du tour. If you're sitting at home watching the race unfold thinking this looks easy, sign yourself up to ride a stage of the Tour next year. Around 8,500 amateur riders get the professional treatment with roads closed to traffic and refreshments provided. The 2014 amateur edition will see the riders tackle the 145.5km 18th stage from Pau to Hautacam which features four categorised climbs, including the legendary Col du Tourmalet. (see K is for King of the Mountains).

F is for finished almost before it had begun. Cheating blighted the second Tour de France in 1904. The top four to finish were disqualified (see 'G is for Garin') and race organiser Henri Desgrange declared: "The Tour de France is finished and I'm afraid its second edition has been the last. We have reached the end of the Tour and we are disgusted, frustrated and discouraged." Frenchman Henri Cornet was awarded the title, although he was reprimanded for accepting a lift in a car. He remains the race's youngest winner, at the age of 19.

G is for Garin. Maurice Garin holds the distinction of winning the first Tour de France in 1903 and also the dubious honour of being the first winner to be disqualified, a year later. It is thought the Frenchman caught a train at some point, while he was also given illegal feeds from officials in a race where cheating was rife. Riders took lifts in cars or were towed: tying one end of a wire to a wing mirror and attaching the other to cork and holding it in your teeth was a favoured method. Partisan fans, cheering on riders from their region, attacked rivals, while nails were often left on the road to puncture tyres.

H is for Hinault. Bernard Hinault was the last French winner of the race, in 1985. It was his fifth victory and cemented his place as one of the all-time greats of cycling. Hinault is the only rider to have won each of the three Grand Tours (France, Italy and Spain) at least twice.

I is for idea. While L'Auto editor Henri Desgrange is credited as organising the first race in 1903, the idea of a bike race around France was actually suggested by Geo Lefevre, one of his young journalists, as a way of boosting the ailing circulation of the sports paper. Desgrange was not wholeheartedly behind the idea and, after putting Lefevre in charge, stayed away from the first Tour. However, L'Auto's circulation more than doubled to 65,000 and by 1933 it was up to 854,000.

J is for jerseys. There are four up for grabs: the prestigious yellow (see 'Y is for yellow') for the race leader and overall winner; green for winning the most points in the race (see 'S is for sprinter'); the red and white polka dot for the best climber (see 'K is for king of the mountains'); and white for the best young rider, aged under 25 at the start of the year. Only one man has won them all, Eddy Merckx.

K is for king of the mountains. Points are awarded to the first riders over the summits of climbs, which are categorised from one to four. A fifth, 'hors categorie' (outside category), is applied to the most severe ascents. The leader wears the polka dot jersey, and France's Richard Virenque has the most overall victories. He won seven from 1994 to 2004, but doping scandals blighted his achievements.

L is for lanterne rouge and longest race. The rider who is last in the race is known as the lanterne rouge, which translates to red light and refers to the light at the back of a train or car so it can be seen. Belgium's Wim Vansevenant is the only man to finish last three times, in 2006, 2007 and 2008. L is also for longest race - the 1926 version was a staggering 5,745km (3,569 miles long). Today's race is usually around a more modest 3,400km.

M is for mountains. The race first crossed the Pyrenees in 1910 and the Alps one year later, with riders often pushing their bikes to the summits. The first finishes at altitude - Alpe d'Huez, Sestriere and Puy-de-Domecame - were in 1952 and Italy's Fausto Coppi won all three on his way to winning his second Tour. Mont Ventoux achieved notoriety when Britain's 1965 road race world champion Tom Simpson died on the mountain during the 1967 Tour. He collapsed less than one mile from the summit after falling off and being put back on his bike. The Galibier is the most climbed mountain and, to mark the 100th anniversary of its first crossing in 2011, it boasted the highest altitude finish in Tour history at 2,645m.

N is for narrowest victory. Greg LeMond beat Laurent Fignon by just eight seconds to win his second Tour title in 1989. LeMond, who in 1985 became the first non-European to win the race, started the final stage, a 24km time trial into Paris, 50 seconds behind home favourite Fignon, but powered to victory aided by triathlon handlebars and an aerodynamic helmet.

O is for oldest rider. Henri Paret was 50 years 215 days when he embarked upon the 1904 race. The youngest was Macel Kerff, who was 17 years 49 days when he competed in the inaugural race one year earlier.

P is for Paris. The French capital and host to every Tour finish. Since 1975, the race has always ended on the Champs-Elysees. Britain's Mark Cavendish (see 'S is for sprinter') is the only man to win the closing stage on Paris's famed boulevard four times - 2009, 2010, 2011 and 2012. He will be chasing a record fifth this year. Eddy Merckx (see R is for records) also won four final stages but they were not on the Champs Elysees.

R is for records. Belgium's Eddy Merckx holds the record for most stage wins (34), most days spent in the yellow jersey (96) and, in 1969, he became the only rider to win the yellow, green and polka dot jerseys (see 'J is for jersey') in the same race. If the white jersey for best young rider had been around, he would have won that too.

S is for sprinters. The powerhouses of the race, they shine on the flatter stages and toil in the mountains. Britain's Mark Cavendish is among the best in the world and claimed the green jersey in 2011 for winning the most points. Cavendish, who has won 25 stages in seven previous editions, will be trying to win the points jersey back from Slovakia's Peter Sagan, who has won the last two titles, while German duo Andre Greipel and Marcel Kittel will also fancy their chances.

T is for time trials. There is just one on this year's Tour but it could prove pivotal in helping decide who wins the race. Climbing specialists quickly find out if they gained enough time in the mountains to hold off the time-triallers, while the time trial specialists will be hoping to build an advantage to take into the remaining mountain stage. France's Jacques Anquetil, the first five-time winner of the Tour, built his victories on his ability to ride alone against the clock.

U is for United States. Before 1985, every winner of the Tour de France had come from Europe. Greg LeMond, of the United States, changed all that and he went on to win three Tours in total. But the country has also brought arguably the biggest shame on the race with Lance Armstrong's doping admission (see A is for Armstrong). Australia's Cadel Evans, who won in 2011, is the only other non-European winner.

V is for Voigt. Germany's Jens Voigt hinted that last year was likely to be his 16th and final Tour de France at the age of 41, but the old man of the peloton is back for one last crack. Famed for his aggressive style of riding and shouting at his legs, telling them to shut up as he battles the pain, Voigt has become a cult hero to many cycling fans. He won't win the Tour but expect to see him riding at the front of the peloton or in a breakaway or two.

W is for Wiggins. Bradley Wiggins became Sir Bradley Wiggins after becoming the first British rider to win the Tour de France in 2012. He also won the Olympic time trial at London 2012 as he enjoyed a sensational year in the saddle. 2013 was not so kind with him being forced to abandon the Giro d'Italia. He did not defend his title in France and will not be around this year either.

X is for X-rays. In 2010, Fabian Cancellara's bike was X-rayed to make sure he had not secreted a tiny motor inside the frame of his bike. The Switzerland champion had comfortably won the prologue but his was not the only bike to be checked. Among the 13 others, David Zabriskie's bike was X-rayed, prompting his Garmin team director to Tweet: "They didn't find a motor, but they did find an old eight-track of the Eagles."

Y is for yellow. The colour of the most important jersey in the race. France's Jacques Anquetil was the first to win five Tours - the last in 1964 - while Belgium's Eddy Merckx (see 'R is for record') matched that in 1974. Spain's Miguel Indurain is the only man to win five successive Tours, which he completed in 1995. Why yellow? L'Auto (see 'I is for idea') was printed on yellow paper. Eugene Christophe was the first to wear yellow in the 1919 edition of the race.

Z is for Zabel. Erik Zabel won the green points jersey in six consecutive years from 1996 to 2001. He is regarded as one of Germany's finest cyclists and the greatest of their sprinters. Zabel won 12 Tour de France stages.