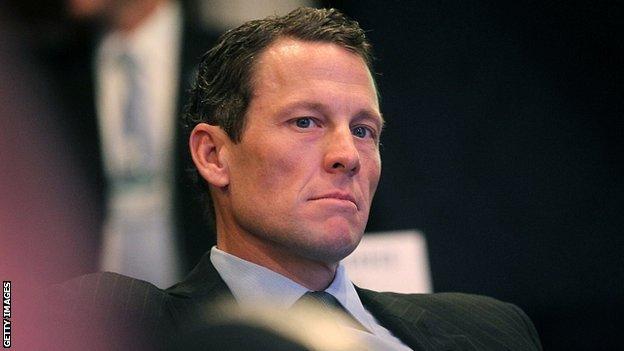 Seven-time Tour de France winner Lance Armstrong has described charges against him by the US Anti-Doping Agency as "baseless [and] motivated by spite".

The allegations against him include previously unpublicised claims of doping in 2009 and 2010, reports say.

The 40-year-old has been immediately banned from competing in triathlons, a sport he took up after his retirement from cycling in 2011.

"I have never doped," Armstrong said in a statement on his website.

"These charges are baseless [and] motivated by spite."

In its 15-page letter, USADA said its investigation included evidence dating back to 1996 and accused Armstrong of a "pervasive pattern of doping" over many years.

It says it collected blood samples from him in 2009 and 2010 that were "fully consistent with blood ma­nipu­la­tion including EPO use and/or blood transfusions".

He could face a lifetime ban and be stripped of his awards if he is found to have used performance-enhancing drugs, says the BBC's Jane Little in Washington.

Armstrong said on his website: "I have been notified that USADA, an organisation largely funded by taxpayer dollars but governed only by self-written rules, intends to again dredge up discredited allegations dating back more than 16 years...

"These are the very same charges and the same witnesses that the Justice Department chose not to pursue after a two-year investigation."

He added: "Although USADA alleges a wide-ranging conspiracy extended over more than 16 years, I am the only athlete it has chosen to charge.

"I have never doped, and, unlike many of my accusers, I have competed as an endurance athlete for 25 years with no spike in performance, passed more than 500 drug tests and never failed one."

USADA confirmed they had written to Armstrong to notify him of the allegations of "anti-doping rule violations".

The agency said it had also contacted three team doctors and two team officials formerly associated with the US Postal team.

It said: "USADA only initiates matters supported by the evidence. We do not choose whether or not we do our job based on outside pressures, intimidation or for any reason other than the evidence.

"Our duty on behalf of clean athletes and those that value the integrity of sport is to fairly and thoroughly evaluate all the evidence available and when there is credible evidence of doping, take action under the established rules.

"As in every USADA case, all named individuals are presumed innocent of the allegations unless and until proven otherwise through the established legal process."

Armstrong, who has battled against testicular, brain and lung cancer, has always denied taking drugs.

In February, federal prosecutors in the United States dropped an investigation into allegations of doping at a team partly owned by Armstrong.

A statement from the International Cycling Union (UCI), which did not name Armstrong, confirmed it had been notified of cases opened by USADA.

It said: "The UCI is not aware of the information that is available to USADA on the persons concerned and has not been involved in the proceedings opened by USADA."