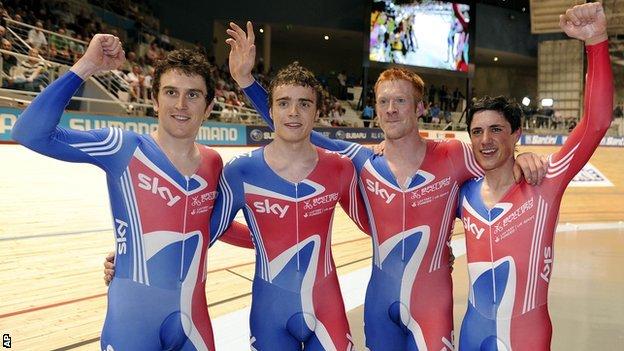 Brailsford combines his role as GB performance director with his position running Team Sky and could focus solely on the latter after London 2012.

"It will be hard to replace him if he goes," said Clancy.

"[But] he's doing great things with Team Sky and if he wants to go there will be no hard feelings from us."

Clancy believes Brailsford, who joined British Cycling as a consultant in the late 1990s and now has responsibility for the entire team, would leave a lasting legacy.

"He's already done us a massive favour over the years, and I'm sure the infrastructure he'll leave behind, if he goes, will be pretty stable and things will carry on," said Clancy.

Five-time world champion Clancy won his Olympic gold as part of a world record-breaking team-pursuit quartet, and it was one of a remarkable haul of 14 medals claimed by GB in Beijing, including seven golds from 10 events in the velodrome.

This built on impressive returns from the Athens and Sydney Olympics, which helped Great Britain emerge as a cycling superpower.

Brailsford's part in this made him the obvious choice to manage Sky's high-profile foray into the competitive world of road cycling.

Now in their third full season, the team can boast the best of British talent in Mark Cavendish, Geraint Thomas and Bradley Wiggins, as well as foreign stars such as Edvald Boasson Hagen and Richie Porte.

Speaking shortly before this month's World Track Championships in Melbourne, Brailsford hinted for the first time that he can no longer continue to do both jobs to the same high standard.

"The growth of cycling is enormous and there's only so much I can do in a day," the 48-year-old said.

"There's no doubt that with all the responsibilities I have it's difficult to maintain the same level of detail across the entire programme.

"I think we're all in agreement that it would make sense for my role, or my job description, to shift slightly, but we'll review that after the Games."

This prompted British Cycling's chief executive Ian Drake to stress that nothing would change until after London 2012, and the link between British Olympic cycling and Team Sky would remain, with Brailsford central to that relationship.

For his part, Clancy is relaxed about any changes that may be made to the management structure, particularly after GB's fine display in Melbourne, where the team won half of the events that will be staged in the Olympic Velodrome in August.

GB's victory in the men's team pursuit was especially significant as it came after a few years that had seen fierce rivals Australia gain the upper hand.

"It was probably the first time that our A team and theirs has come together since Beijing and we beat them," said the 27-year-old, who is also likely to ride the omnium in London, a multi-discipline event he won at the 2010 World Championships.

"We know we've got our work cut out to beat them but it's great to be trading punches with them again."