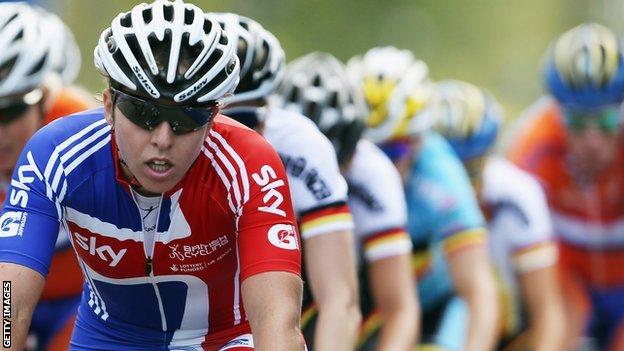 Nicole Cooke has insisted she has sent out a "signal" to her rivals ahead of her Olympic title defence by securing a first win of the European season.

The 2008 Beijing road race champion beat Belgium's Evelyn Arys to win the fifth and final stage of the Energiewacht Tour in the Netherlands.

Cooke will hope to defend her Olympic crown in London on 29 July and become the first woman to retain her title.

"I'm very pleased as it always great to have that reference point against the best riders in the world.

"I think it is a really good signal to myself and my rivals that when it comes to the sharp end of racing and tactics, I'm up there - and I'm as good as ever of executing a win.

"It is a fantastic feeling to get my 2012 season going properly. I should be increasing form and building for London.

Cooke's Dutch stage victory on Sunday comes after her win at the Perth Crits in Australia as the two-time women's Road World Cup champion prepares for her home Olympics.

The Welsh rider has suffered a lull since winning the Olympic and World Championships double in 2008 but her triumph in Sunday's 84-mile stage in Groningen shows the Cooke is still a threat.

Although Cooke appreciates the Energie Wacht Tour stage win is a boost, she understands winning another Olympic gold will be much tougher.

The reigning Olympic champion faces a battle with Lizzie Armitstead to lead the GB team at the 2012 Games.

Armitstead won two road races in Belgium last month but failed to finish the final stage of the Energiewacht Tour.

Selection for the Olympic squad is due to be confirmed in June.

"There is a very long time between now and the Olympics," Cooke told BBC Sport.

"There is still a lot of work to do and much to focus on. The comings weeks and months will make the big difference on that big day in London in July.