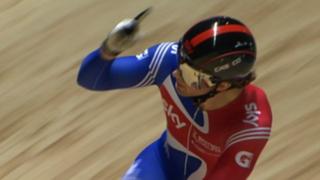 World champion Kenny takes a significant step towards taking Great Britain's one London Olympics sprint place ahead of Hoy by defeating his team-mate.

Just one of the duo who finished first and second in the 2008 Olympics can represent Britain at the London Games under the one rider or team per nation per event rule.

Kenny won the best-of-three contest 2-0 to advance to the final, where he will meet Gregory Bauge of France.

How Mourinho has added his secret ingredient to Spurs - Jenas analysis