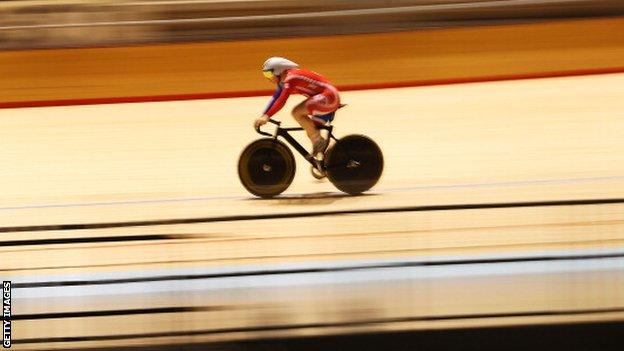 Hindes raced for Germany as a junior but makes his GB debut at this week's World Championships in Melbourne.

"The 'plastic Brit' debate is obviously relevant here, and my understanding is the German team aren't too chuffed. But this is part of the system. British Cycling cannot just look at what they have and make the best of it, they have to take things from other areas.

"If that means taking a rider from another 'area', then so be it. There's nothing underhand. If there was, it wouldn't be legal."

The 19-year-old could fill a gap which has hampered Britain's team sprint medal hopes in recent years.

"He's improving at a rapid rate and if he performs well he could be in the running for the Olympics," said Hoy.

"If [Philip can give us] a good start then with Jason being one of the fastest guys in the world over the second lap, and myself for the third lap, there's a good chance we could challenge for the gold medal."

Ross Edgar and Matt Crampton have been among the names inserted into the 'man one' position in the three-man sprint team since Jamie Staff retired after helping Britain to gold at the Beijing Games four years ago.

Without a world-leading rider at the front to give the team the strongest possible start, Kenny and Hoy are often unable to overhaul more balanced teams such as Germany and France.

"He's still off the pace of the best guys in the world, say the times of Jamie Staff at the last Olympics or Germany's Rene Enders at the moment, but not by much.

Who has Hindes replaced?

Matt Crampton and Ross Edgar have both been trialled in the team sprint with Hoy and Kenny since Beijing 2008, but not to British Cycling's satisfaction. However, one of them may yet be restored to the team sprint for the Olympics.

"We've still got them waiting in the wings," said Hoy. "I know Ross is working hard at home, doing his best to get back into the team. I feel sorry for Matt, he's improved a lot in the last few weeks and his times are pretty exceptional - it's not like he's lost his position, it's more like Phil's won it."

"The crucial thing is he's improving all the time. The other guys have been around for years and make very small improvements, if at all, whereas he's taking two-tenths off his time every month or so."

Hindes set a junior world record for the standing start lap as a rider for Germany, but will make his senior debut for Britain having switched allegiance. His British father made him eligible.

"You've got to remember his dad's British, it's not as if it's somebody who's visited the country a couple of times or has it on residency," said Hoy.

"He's got a German accent but his humour's pretty British. The regulations are there and if you're eligible, you're eligible. We're of the opinion it's fine and he's going to help the team. He feels British to us now.

"He has been living in Germany all his life, but he's moved across to a completely different lifestyle, staying at the academy in a flat with the rest of the guys, learning to cook for himself. He has English as a second language and it's actually remarkably good.

"He reminds me of when I was younger in the team and everything was new and exciting. It's great fun having him in the team."