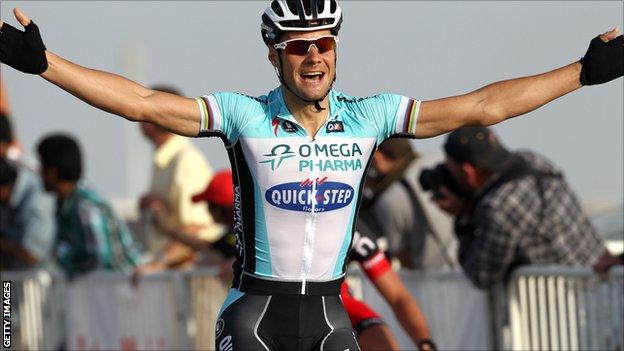 Belgium's Tom Boonen won the opening stage of the Tour of Qatar as Britain's Mark Cavendish made his Team Sky debut.

Cavendish had been struggling with illness in the lead up to the race and chose not to contest the sprint finish, coming home in 51st place.

Veteran Boonen finished ahead of Britain's Adam Blythe and Peter Sagan of Slovakia to take an early lead.

Monday's second stage is a 11.3km team time-trial on the motorcycle Grand Prix circuit of Lusail.

The win was a sign that Boonen is starting to get some of his old form back after an injury-wrecked 2011 when he recorded only two wins - one coming at the Tour of Qatar 12 months ago.

"I am confident that I can still compete with all top sprinters out there, even though these days that is not my priority," Boonen said.

"Last year at this time I was struggling with pains in my left leg which stemmed from the knee operation I had.

"That dragged on for months and then I broke bones in my hand in the Tour of Spain. Today all that is behind me and at last I am free from injuries."

The former world champion said he had been surprised at winning on Sunday having spent three days travelling to the Gulf from South America.

He added: "There also jet lag to get over. At the start of the race I didn't feel great but gradually it all came together for me."

Cavendish, 26, had only been declared fit to ride on the day of the race after falling ill on his flight from London to Doha ahead of the six-stage tour.

And Team Sky sports director Steven de Jongh said he was pleased with how Cavendish performed on his debut.

"He [Cavendish] was helping out his team-mates during the race, which was a pleasant surprise because we had told him he didn't have to do anything if he didn't feel up to it after his illness," De Jongh said.

"Our only goal for him was that he finished the stage today and he did that comfortably."