Australia underlined their status as the premier international sports team on the planet by outclassing England to win the Women's World Cup.

The Australians shattered records in Christchurch on their way to adding the 50-over title to the T20 World Cup and Ashes crowns they already hold.

Alyssa Healy crashed an astonishing 170 from 138 balls, the highest score in either a women's or men's World Cup final. Her partnership of 160 with Rachael Haynes and Australia's total of 356-5 are also women's final bests, the latter a record for any team against England.

England, who were huge underdogs to defend the title they won in 2017, will rue their decision to field first in perfect batting conditions. They also dropped Healy and Haynes in the same over.

Faced with such a mammoth chase, England lost wickets too regularly to ever be in contention, but Nat Sciver batted with authority for a century of her own.

Sciver was 148 not out when England were finally bowled out for 285, spinners Alana King and Jess Jonassen taking three wickets apiece in Australia's 71-run win.

It was a disappointing end to an England turnaround that saw them reach the final despite losing their first three games of the tournament.

Meanwhile, awesome Australia were crowned world champions for the seventh time with a perfect record of nine wins from nine matches.

Lost at the toss?

The suspicion was that England would need everything to go their way in order to beat an Australia side that entered the final with only one defeat in their previous 38 one-day internationals.

For as much as England - and Australia - favour chasing, it seemed like a gift for Heather Knight to give away the opportunity to bat first.

England did not bowl particularly badly, but the dropped catches were a hammer blow. By the end, Healy was playing some outrageous strokes, scoring runs at will.

Despite Sciver's wonderful innings, the contest was effectively over at the interval, the most dramatic World Cup ever denied the final it deserved.

Opener Healy made a century in Australia's semi-final win over West Indies and here went one better, playing one of the all-time great one-day innings.

What made the assault all the more remarkable was a measured beginning - Australia took only 37 from the first 10 overs in the face of some searching new-ball bowling.

Healy and Haynes, who made 68, were just starting to go through the gears when the drops came in the same Kate Cross over. Haynes, on 47, escaped as a diving Danni Wyatt missed a chance at point, Healy had 41 when the ball burst through Sciver's hands at mid-wicket.

Reaching a half-century from 62 balls was Healy's signal to go into overdrive. She scored in all areas of the ground, toying with England by hitting the ball where a fielder had just been moved from. Healy's second 50 came from 38 balls, her third from just 29.

After Haynes miscued to point, Beth Mooney arrived to bludgeon 62 from 47 balls in a stand of 156 that came in little more than 16 overs. Australia took 120 runs in a final 10 overs of mayhem.

By the time Healy departed, stumped off Anya Shrubsole, she had cracked 26 fours and become the first woman to pass 500 runs at a single World Cup.

All inside a packed Hagley Oval stood to applaud Healy, Australia's magnificent match-winner and player of the tournament. 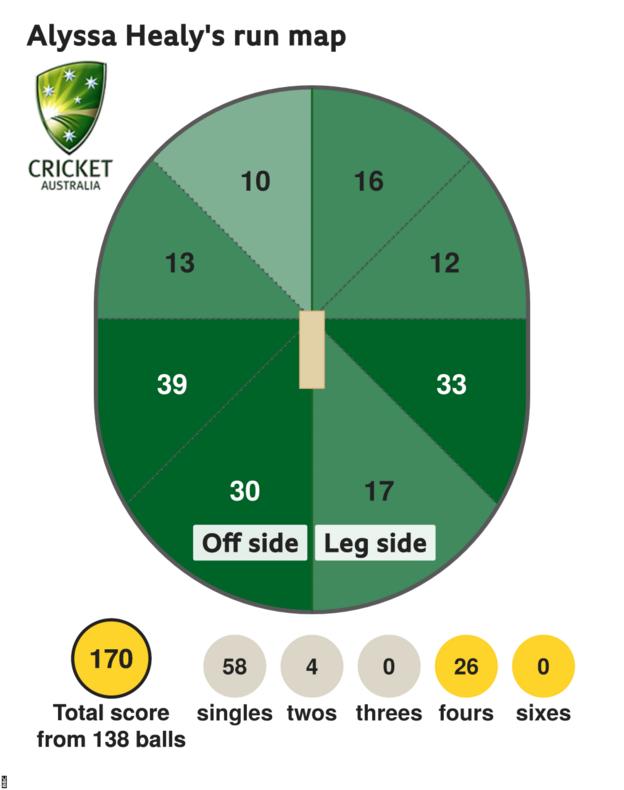 For England to have even made this final was a significant achievement given their three opening defeats. They were one wicket from a loss against New Zealand that would have knocked them out.

They responded with five straight wins and seemed relaxed as the final began, only to be blown away by the Australians.

Spinner Sophie Ecclestone, the tournament's leading wicket-taker, leaked 71 runs from her 10 overs, veteran pacer Katherine Brunt conceded 69 from hers, while young off-spinner Charlie Dean was targeted to go for 34 from four.

Only Shrubsole, England's match-winner in the final five years ago, escaped the carnage with a respectable 3-46.

On such a superb pitch, England actually scored more quickly than Australia, yet only Sciver passed 27.

Faced with impossible odds, she scored heavily through the leg side, often with ingenuity, reaching three figures from 90 balls.

How different might this final have turned out had Sciver been unleashed in the first innings?

'Amazing effort' - what they said

England captain Heather Knight on BBC Radio 5 Live: "Credit to Australia. It was a remarkable innings from Alyssa Healy - to do that in a final and for them to put that on the board was tough. We probably didn't have an answer at times - they batted outstandingly. It was a very good track and it made it very hard to defend. We fought hard in the chase - Nat Sciver was unbelievable, what an innings. We are disappointed, but credit to Australia for the way they played today."

Australia captain Meg Lanning: "I'm really pleased with that. This tournament has been a long time coming - it has been in the back of our minds and there are no doubts we wanted this trophy in our cabinet. It has been an amazing effort over a number of years and to finish it off like this is amazing."

Ex-England spinner Alex Hartley: "Australia have had a professional domestic set-up for five or six years longer than England have. England only started a couple of years ago and the first year, realistically, was heavily impacted by Covid. We've had professional players in England for one year effectively and that is only 10 or 15 games.

"This Australia side have played domestic cricket for years and years. It will take a while for England to catch up, but they are not a million miles away, and I guess that is the exciting thing."