Rahul Tripathi hit a six off the penultimate ball as Kolkata Knight Riders overcame a mighty collapse to reach the Indian Premier League final with a thrilling three-wicket win over Delhi Capitals.

After Delhi posted a well below-par 135-5, KKR looked to be in the driving seat with a strong start.

Shikhar Dhawan scored 36 off 39 balls on a seemingly tricky surface for Delhi, with leg-spinner Varun Chakravarthy - who has conceded less than seven runs per over in KKR's last nine games - impressive.

Dhawan - the third-highest run-scorer in this year's competition - scored less than a run a ball, indicating how difficult the Delhi batters found the conditions.

Marcus Stoinis managed 18 off 23 and big-hitting captain Rishabh Pant scored just six. Shreyas Iyer (30 off 27) hit 15 off the final over, though, to ensure Delhi at least posted a competitive total.

KKR's recent form and march to the final can be credited to economical bowling and top-order runs.

Once again, Venkatesh Iyer - no relation to Shreyas - countered the idea of Sharjah being a bowler-friendly wicket.

From launching Axar Patel out of the ground to delightfully whipping Avesh Khan through mid-wicket, Venkatesh showcased both powerful hitting and traditional cricketing shots.

He was brought in for his IPL debut once the tournament resumed in the UAE and has gone on to score 320 runs at an average of 40 and strike-rate of 125.0.

Venkatesh was assisted by fellow opener Shubman Gill (46 off 46) in the chase, with KKR seemingly cruising towards victory. 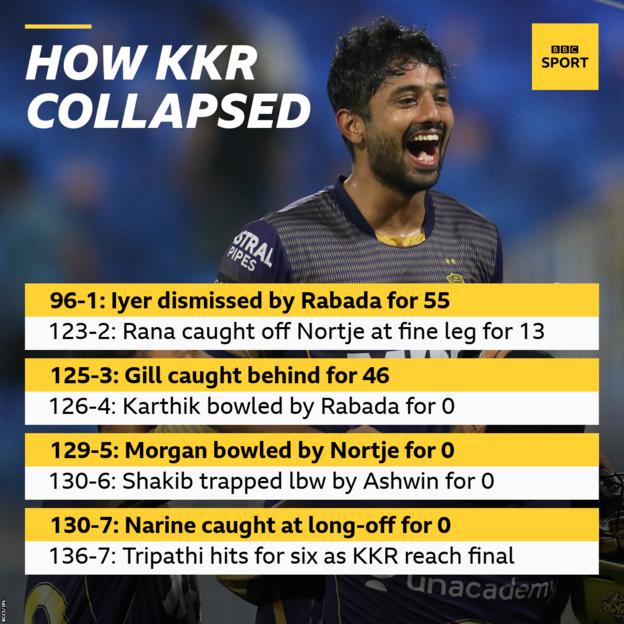 Even when Venkatesh was caught in the deep off the bowling of Kagiso Rabada, KKR looked to be well set with just 40 needed off 46 balls.

But when Nitish Rana (13 off 12) fell to Anrich Nortje, it sparked one of the most incredible collapses in the history of franchise cricket.

Gill was dismissed by Avesh Khan before Dinesh Karthik was bowled by Rabada and England's limited-overs captain Eoin Morgan by Nortje, both of them falling for a duck.

With seven needed off the final over, spinner Ashwin took the wickets of Shakib Al Hasan and Sunil Narine, who also remarkably went without scoring.

Out of nowhere, Delhi could sense victory as slumped KKR faces in the dugouts looked on.

But Tripathi, who had not found the boundary from his first 10 deliveries, smashed it back past the bowler's head to end the game in the most dramatic fashion.

In a calm post-match interview, KKR skipper Morgan said: "Six off two, the odds were probably in favour of the bowling side, but Rahul Tripathi has done superbly well for us."

The cricketing world, meanwhile, was much more animated in their reaction...

When the tournament was suspended in May after a surge in coronavirus cases in India, KKR had registered two wins from seven games and were second from bottom.

They have now won seven out of nine games since the delayed tournament resumed in the Emirates.

Having taken the fourth play-off spot, they beat Royal Challengers Bangalore in the first qualifier and head to the final now looking to complete a remarkable comeback and lift their third IPL trophy.

Despite the fighting spirit shown at the end, for Delhi - who have never won the IPL - it marked a disappointing end to what had been a brilliant campaign.

Last season's runners-up topped the group stage and had two opportunities to reach the final, but followed up a loss to Chennai on Sunday with this thrilling, but heartbreaking outcome.