Almost a year later than expected, the men's T20 World Cup is about to get under way.

The tournament, initially meant to be held in India, was delayed because of the coronavirus pandemic but, 364 days later, it will get started in the United Arab Emirates and Oman.

Qualifying for the final four spots in the main draw begins on Sunday, with Ireland and Scotland among those in contention.

The 'Super 12' group stages then begin on Saturday, 23 October, with Australia opening the tournament against South Africa from 11:00 BST.

They will be followed by England, finalists in 2016, who will face defending champions West Indies at 15:00.

Crowds at the stadiums in the UAE and Oman will be capped at 70%.

There will be commentary of every ball of every game by the Test Match Special team on BBC Radio 5 Live Sports Extra, as well as live text commentaries on the BBC Sport website and app.

It's simple - each team plays every team in their group once, with the top two advancing to the knockout stages.

The Super 12 group stages run from 23 October to 8 November, with the semi-finals on 10 and 11 November.

The final, which will be held at Dubai International Cricket Stadium, takes place on 14 November.

The top nine teams in the ICC rankings were assured of a spot in the tournament, while eight teams will face off in a qualifying competition to reach the group stages.

Ireland, Namibia, the Netherlands, Sri Lanka, Bangladesh, Oman, Scotland and Papua New Guinea will compete for the final four spots when qualifying gets under way on Sunday.

Are England the favourites?

England are looking to add the T20 world title to their 50-over World Cup crown, which they won in thrilling fashion in front of a packed Lord's in 2019.

They start the tournament as the top-ranked T20 team and they reached the final in 2016, where they were undone by some final-over brilliance from Carlos Brathwaite.

They have the world number one T20 batter in their side in Dawid Malan, while Moeen Ali and Adil Rashid make a formidable spin duo.

The absence of Jofra Archer and Ben Stokes is a blow - not least for the confidence Stokes' presence seems to provide England in every format - but they have a well-stocked pace attack, with the return of left-arm fast bowler Tymal Mills offering them a point of difference.

India, led by Virat Kohli in his final outing as T20 captain, will likely be England's biggest threat, with many of their squad having experienced these conditions in the Indian Premier League.

Beaten 50-over World Cup finalists New Zealand boast a strong bowling attack, while West Indies have arguably a more rounded line-up than the side that clinched the trophy five years ago.

Who are the key players? 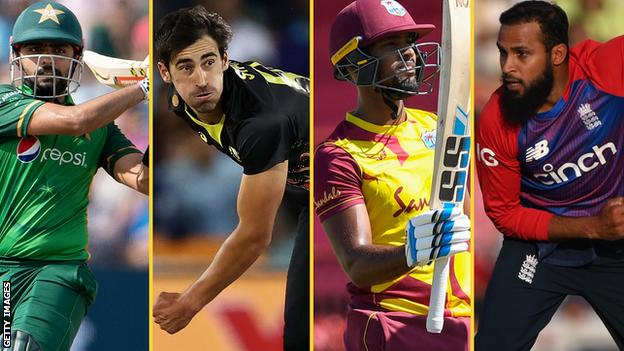 Second in the batting rankings, Babar's aggression and clean hitting makes him one of the most exciting players to watch.

The leading wicket-taker at the 2019 World Cup, Starc's pace and slower balls make him a key figure at the start and end of an innings.

One of the most naturally talented batters around, Pooran has experience in T20 leagues around the world, and could offer consistency for the defending champions.

Not many players can hit Rashid out of the attack. The pressure he applies in the middle overs has been crucial to England's recent success.

Five years ago in Kolkata, West Indies needed 19 runs off the final over against England to claim their second global T20 title.

With Stokes bowling, Brathwaite hit the first four balls for six to clinch victory and spark huge celebrations with his team-mates.

There is some relief for England fans this time around - Brathwaite will be safely behind the microphone as part of Test Match Special's commentary team.