The multi-format series between England and India started 26 days ago, but we still don't know who is going to win it, after the tourists set up a decider with a thrilling eight-run victory in the second Twenty20 international in Hove.

England, who lead 8-6, cannot lose with two points available from the third and final T20 match on Wednesday, which is live on BBC Two (18:00 BST).

India got off to a blistering start, with Shafali Verma and Smriti Mandhana sharing 70 for the first wicket, before some brilliant England bowling restricted them to 148-4.

England were cruising at 106-2 in reply but, in a spell of just 19 balls, they slipped to 125-6. That, combined with some excellent India bowling and fielding, left them with too much to do as they finished 140-8.

Here, BBC Sport rounds up the key moments of a match that yo-yoed one way and another.

'This girl is so good at cricket'

She dominated pre-series conversation and has been part of a captivating battle with England veteran Katherine Brunt, who is 19 years her senior.

Here, she showed zero fear, and some may say respect, for Brunt - hitting five successive fours in the fourth over.

It was another example of the right-hander's breathtaking talent. Here is how she did it:

Former England spinner Alex Hartley perhaps said it best on Test Match Special: "This girl is so good at cricket."

What was maybe even more impressive on Sunday was the way she took on the short ball. England have successfully targeted her with that in recent games, but Verma has demonstrated her ability to learn on the job.

'We gave it away'

How did England lose that?

It's a good question, and one we might be not be able to answer. England captain Heather Knight said her side "gave it away" and weren't "ruthless".

A mixture of superb India fielding, poor running - there were four run outs in total - and some bad luck contributed. Here's how the collapse happened:

England head coach Lisa Keightley has spoken about wanting to see her side in pressure situations and how she wants to find a finisher. That search is still ongoing, based on today.

'She is playing for her future' 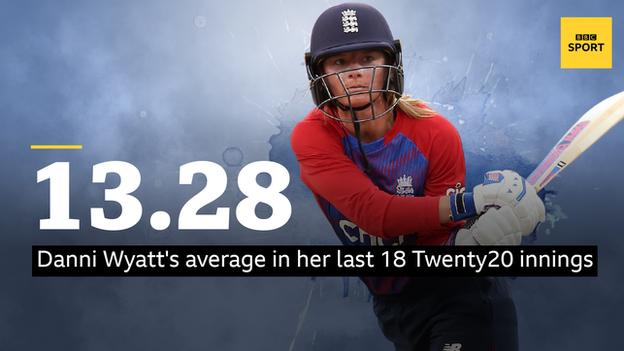 "Danni Wyatt will be oh so aware that, in every game, she is playing for her future," said Test Match Special commentator Henry Moeran after the England opener fell for just three.

The right-hander was left out of the one-day series due to "competition for places", and her recent international form has seen her pass 30 twice in their last 18 T20 innings, and 25 once in 11 one-day innings.

With Lauren Winfield-Hill, Georgia Adams, Emma Lamb, Georgia Elwiss and Fran Wilson among those pushing from the sidelines, Wyatt has to find runs.

The moment she picked out Harmanpreet Kaur at mid-off she looked up to the sky and closed her eyes, before muttering to herself.

A score needs to be around the corner.

The final game in the multi-format series is at Chelmsford on Wednesday. The match starts at 18:30 BST, and is live on BBC Two, BBC iPlayer and the BBC Sport website and app.

India need to win, and take the final two points, to level the series at 8-8.