Essex had to settle for a draw on the final day at Worcestershire after being frustrated by the home batsmen.

Having resumed on 302-5, Sam Cook (4-60) took three wickets to help dismiss the Pears for 364 and allow Essex to enforce the follow-on before lunch.

Determined batting in the afternoon saw Worcestershire reach 105-1 at tea, still 92 runs behind the visitors.

Starting the day with a 259-run lead on a New Road pitch giving little assistance, Essex seamer Cook picked up the wickets of Riki Wessels (33), Ben Cox (37) and Alzarri Joseph for a duck in quick succession before Simon Harmer (4-85) bowled Ed Barnard to leave the hosts 326-9.

But a valuable last-wicket stand between Dillon Pennington (30) and Charlie Morris took up 15 overs and meant that Essex had only three overs to bowl at the openers before lunch.

Cook seemed the only man capable of making breakthroughs, removing Daryl Mitchell for 20 early in the afternoon and trapping Fell (35) straight after tea.

The right-armer recorded seven maidens in his 11 overs in the second innings for the cost of just seven runs.

Essex, Bob Willis Trophy winners in 2020, are fifth in Group One after four matches, having missed the chance to go top of the table with victory.

Worcestershire are three points above the visitors in third and just two points behind leaders Warwickshire. 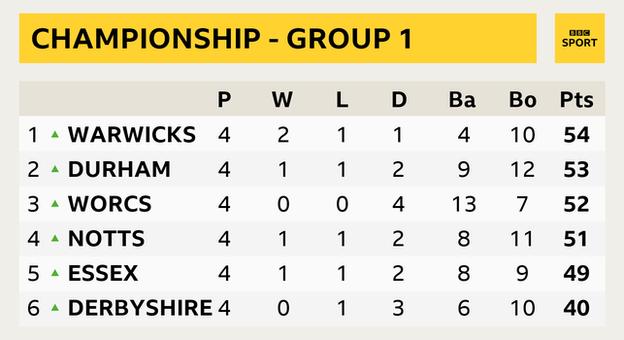