Ian Cockbain and Tom Lace shared a 224-run stand as Gloucestershire chased down 348 to beat Leicestershire by four wickets on an enthralling final day.

Leicestershire declared on 201-9 after losing six wickets for 45 runs as they tried to quicken the pace of the game.

Ben Mike struck twice to help reduce Gloucestershire to 52-3 in their chase.

Cockbain (117) and Lace (97) rebuilt and then upped the pace to get close to a victory which they achieved to go top of Group Two despite a late wobble.

Lace was caught in the deep three short of his century, the first of three wickets for spinner Callum Parkinson, to cause some late alarm for the hosts at Bristol. 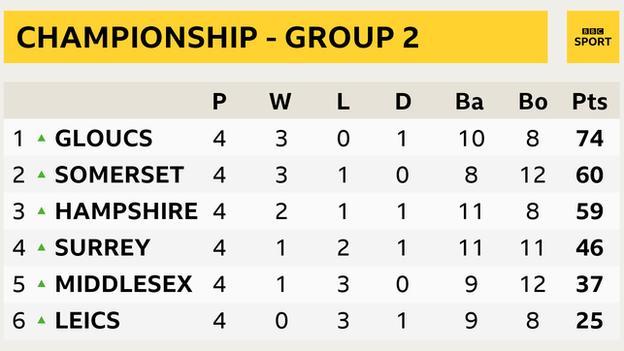 But the bulk of the damage had been done by the time Lace departed, with 72 needed off 12.5 overs.

Cockbain and Ryan Higgins (33) also succumbed to Parkinson in successive deliveries, but only 21 runs were required with four wickets left and Gloucestershire got over the winning line without any further slip-ups.

Leicestershire remain winless, while Gloucestershire - who only saved themselves from the follow-on by three runs - have started a County Championship season with three wins and a draw for the first time since 1948.