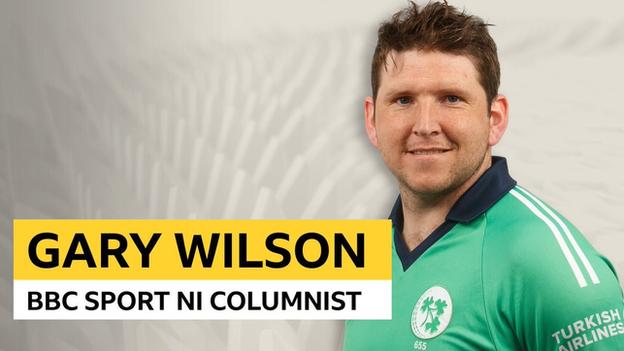 There's no doubting that a 3-0 series defeat by Afghanistan in fixtures that were World Cup qualifiers was the last outcome Ireland would have wanted but at the same time, I think it would be a mistake to hit the panic button after the events in Abu Dhabi.

To beat an Afghanistan team now laden with talent to complement the brilliance of Rashid Khan, Ireland were going to have to play their best cricket in Abu Dhabi.

Apart from Paul Stirling who continued his incredible form with a second straight century, we were unable to do that alas.

With the exception of Stirlo, we were just a little bit off in all the components of the game. We had periods where we batted, bowled and fielded well in all three games but not enough of them.

But I don't believe there is anything that cannot be rectified or at least improved for our next planned games against Zimbabwe in March when we are scheduled to play them in three T20s and three more ODIs which will also double as World Cup qualifiers.

It might sound a little odd to some but I believe we are in a significantly better position than post the 2015 World Cup - which was a tournament where we beat West Indies.

After 2015, there were quite a few retirements and for a time it maybe looked like the new material wasn't coming through. There were some people even predicting that we might 'do a Kenya' and fall away quite badly.

But while we missed out on the 2019 World Cup after the number of teams in the tournament was reduced, a production line of young talent has emerged over the last couple of years.

One of those young men Lorcan Tucker scored 83 in the first match against the Afghans and Curtis Campher was an assured batting presence throughout the series.

It's maybe not what people want to hear now, but in two years' time, those young guys will have reaped the benefits of having played in that three-game series against Afghanistan in Abu Dhabi.

A number of the young players who featured in Abu Dhabi will likely head to Bangladesh next month for the Ireland Wolves tour and that experience will prove just as invaluable for them.

Looking more specifically at Tuesday's match, Rashid Khan's late innings was a bit of a hammer blow as his quickfire 48 got them from 163-7 to a 266 total - after he had done almost exactly the same in the opening game to rescue the Afghan innings.

Rashid is some operator. As I said in my first column, I reckon he's the best bowler on the planet and he can break your heart with the bat as well.

No one will be more disappointed with the outcome of the series than our captain Andrew Balbirnie, who has real passion for Irish cricket and the country full stop.

In terms of his own batting, the series didn't just didn't come off for him. It happens but Andy is a seriously good player and will dust himself down and get ready for Zimbabwe.

In general, we can't be over-reliant on Paul and Andy. Everybody has got to take a bit of responsibility.

'World-class' Stirling a man in demand

While we lost the series, Paul Stirling's performances again showed why he is now in demand from T20 and T10 franchise tournaments all over the globe.

He's actually remaining on in Abu Dhabi for the T10 tournament that starts there in a few days when more than a dozen Afghan cricketers will be involved.

I was reading somewhere that Paul credits Ireland coach Graham Ford for the escalation in the heights his career has now reached.

When Fordy came in, he said that he didn't want Paul just to be playing cameos of really good 50s and 60s. He asked him to take on a bit more responsibility and it was maybe the quiet word Stirlo needed.

You maybe don't see the flamboyance he was once associated with but this is a guy who has averaged 85 in the last 12 months.

Paul's still scoring at such a good rate. He continues to take on the difficult shots but his skill level is such that he's able to pull them off.

He's maybe just fine-tuned the mental side of his game a little bit to allow him to go on and get big scores.

He's now up to 20th in the ICC's ODI batting ranking after the 285 runs he scored in the series. Not bad for a lad from Belfast.

'Roy Torrens like a second Dad to a lot of us'

I can't finish up this column without paying tribute to our former Ireland team manager Roy Torrens after his death over the weekend.

It's hard to put into words how important he was to us the Ireland players.

Roy was like a second Dad to a lot of us.

In his job as Ireland manager from 2004 until 2016, he always wanted the best for the individual as well as the team.

He loved telling a story. Quite often you would hear the same story from him, three or four times, but you didn't mind because he told it so well.

Whenever we swept the boards in Associate nations cricket in 2013 by winning the Inter-Continental Cup plus the T20 and ODI competitions, he compared himself to his idol Sir Alex Ferguson - a man who also knew about winning trebles.

His daughter Judith summed him up best when she said: "If you didn't know my Dad, I am sorry for you, you missed out on a marvellous human being."

I personally will miss Roy unbelievably and Irish cricket will be a lot poorer with him not around. Rest easy big man, heaven is better off.