Joe Root could not have wished for a better start to 2021.

When I interviewed him earlier this week he admitted he had not scored enough runs in recent years.

He talked about leading from the front and starting the year with a bang. By racking up 168 not out against Sri Lanka on day two of the first Test, that is exactly what he has done.

For a long time I have viewed Root as a complete Test batsman. He has a glorious range of shots, must be horrible to bowl to and is the best English player of spin I have seen.

But, the fact this hundred was his fifth in his past 40 Tests shows he has not been making the big runs a batsman of his standard should. Root knows that and he did not try and hide away from it when I asked him.

He has slipped to 11th in the International Cricket Council's Test batting rankings and there is no way he should be that low. His innings in Galle showed that.

On talent alone he is right up there with India's Virat Kohli, Australia's Steve Smith and New Zealand's Kane Williamson - the best three batsmen in the world.

The problem is, he has not been churning out the hundreds those three do and as a result his standing has slipped.

I have no doubt he has the capabilities to get right back up there.

Root will know Sri Lanka's attack is not the strongest he will face this year but that does not matter. You can only deal with what you are up against.

England have a huge year ahead of them with a series in India beginning next month before a home summer featuring the same opponent and an Ashes series next winter.

England will need Root to fire to stand a chance in those series because he is their best player.

He is also the captain and the last person a team wants out of form is the captain. It makes them an easy target and a captain already has enough to think about without worrying about their form as well.

England's approach to Test batting has changed since Root's early days as captain when they said they would be positive and push the game on.

Root has realised the crash-bang-wallop approach is not the way to go in the longest format and as a result England have dialled down their attacking ways.

They now look to build a score, establish a strong position in a match and control proceedings from there. It may be that approach helps Root kick on and nail down those scores he had been missing.

An 18th Test century for Root was certainly a perfect start to the year and stands he and his team in very good stead. 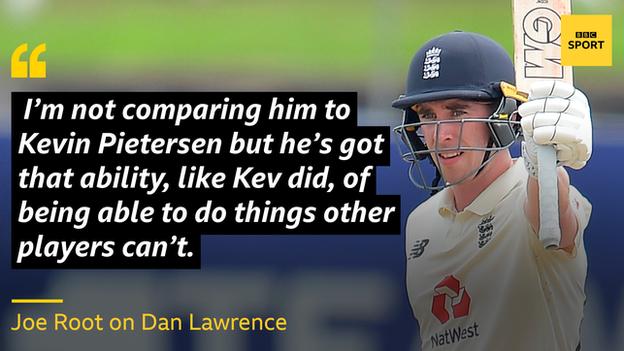 Root scored 73 on his debut more than eight years ago and, funnily enough, Dan Lawrence made exactly the same score in his first Test innings in Galle.

Some players just look like they belong at the highest level from the start - Root was one, Ben Stokes and Sam Curran two others in recent times.

Lawrence looked at ease and that is not something you can fake. Some players come to Test cricket and are nervous, think everything is going to be hard work and feel like they are always trying to justify their selection. I know, I was one of them.

But, even before you consider how he played, Lawrence looked comfortable. He was assured enough to ask a bowler to stop if he was not ready and at no point looked flustered.

He got off the mark first ball and hit a boundary through extra cover from his second. That was one of a number of handsome strokes while he was also assured in defence. He doesn't strike me as someone who will question himself.

I interviewed his father, Mark, on Test Match Special during the tea interval and he was quite a character.

Dan's brother is a wrestler and I sense there is a confident steak in that family. They are naturally sporting folk.

It was a very promising start.

'I'll go to bed with my copy of Wisden'

Lawrence won't be the only one who learned something on day two. It tells you everything about cricket that after 44 years I am still learning things about the game's laws.

When Root hit the ball into the ground before it bounced up onto his glove and into a fielder's hands I, like Sri Lanka coach, Mickey Arthur thought it was out.

It was a really bizarre incident and not one I had seen before.

Mickey is such a colourful, passionate man, as we saw when he was waving his arms and marching to see the third umpire after Root had been given not out.

Like me, it seems Mickey did not know Law 33.2.2.2, which states once the ball has been grounded it cannot be caught - even if the ball is struck again.

Mickey will go to bed with Wisden tonight, as will I. We have to hold our hands up and say we made a mistake.

What I do know is that if someone asks me about that law in the future I will be able to recite it, chapter and verse.