"Thanks a lot for your love and support throughout. From 1929 hrs consider me as retired," he wrote on Instagram.

Dhoni did not specify whether he has retired from all cricket, although Indian media have reported he will play in the Indian Premier League (IPL) later this year.

The wicketkeeper scored 4,876 Test runs and guided India to the top of the International Cricket Council rankings before retiring from the longest form of the game in 2014.

Appointed India captain in 2007, Dhoni stepped down as limited-overs skipper in 2017 having won two Asia Cups in addition to the three global titles, but returned to lead the team for his 200th ODI as captain a year later. 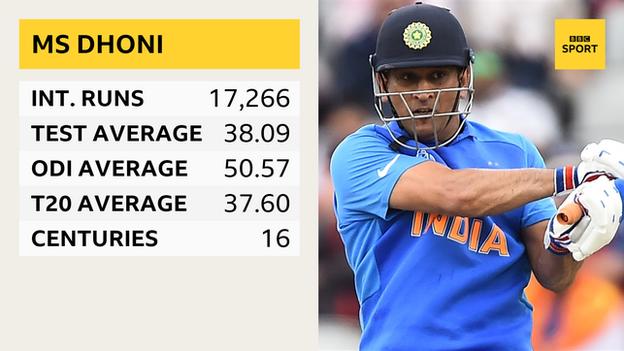 India captain Virat Kohli: "Every cricketer has to end his journey one day, but still when someone you've gotten to know so closely announces that decision, you feel the emotion much more.

"What you've done for the country will always remain in everyone's heart, but the mutual respect and warmth I've received from you will always stay in mine. The world has seen achievements, I've seen the person. Thanks for everything skip. I tip my hat to you."

Former England captain Michael Vaughan: "The 2011 World Cup win was Tendulkar's farewell but masterminded by MS Dhoni. What an incredible international career. You could argue the greatest ever white ball captain & finisher. Cheers for all the memories MS."

England wicketkeeper Jos Buttler: "A hero of mine and so many millions more all around the world. Congratulations on a quite incredible international career MS Dhoni! An honour to have played against you."

India head coach Ravi Shastri: "Massive boots to fill. It's been a privilege and honour to be part of the dressing room and seeing you as a thoroughbred professional at work. Salute one of India's greatest cricketers. Second to none. Enjoy. God Bless MS DHONI."

India spinner Ravichandran Ashwin: "The legend retires in his own style as always. You have given it all for the country. The Champions Trophy triumph, 2011 World Cup and the glorious Chennai triumphs will always be etched in my memory."

India all-rounder Hardik Pandya: "There's only one MS Dhoni. Thank you my friend and elder brother for being the biggest inspiration in my career. Will miss playing with you in the blue jersey but am sure you will always be there for me and will keep guiding me."

India pace bowler Jasprit Bumrah: "You've been a friend and a guide on the field and off it. I've learnt so many valuable lessons by simply watching you and I am glad I got to be a part of your professional journey. Congratulations on an illustrious career, Mahi Bhai, thank you for the memories."

India's all-time leading wicket-taker Anil Kumble: "Congratulations on a great international career. It was an honour to play alongside you. Your calm demeanour and the laurels you brought as skipper will forever be remembered and cherished. Wishing you the very best."

Former Pakistan all-rounder Shahid Afridi: "One of the true legends of Indian cricket and one of the greatest captains."

Dhoni was one of the most colourful and charismatic cricketers of his generation, revered by his fans to an intensity matching Sachin Tendulkar and the Bollywood superstars.

His wicketkeeping was not aesthetic, but efficient, while his aggressive batting will forever link him to limited-overs cricket.

His big hitting and improvisation was responsible for turning many a match on its head.

The most famous, and the innings of his I will never forget, was the World Cup final in Mumbai in 2011, which Sri Lanka appeared destined to win through a beautifully crafted century by Mahela Jayawardene.

Dhoni's unbeaten 91 came from 79 balls and, typically, he finished the match with a straight six that flew into the Wankhede pavilion.

Dhoni did not create the helicopter shot, but he perfected it with no-one else coming close to the furious flourish that completed his stroke, while among his many successes as captain, India's whitewash of Australia in 2012-13 will rank as one of his most memorable. Dhoni set the tone with 224 in the first Test.