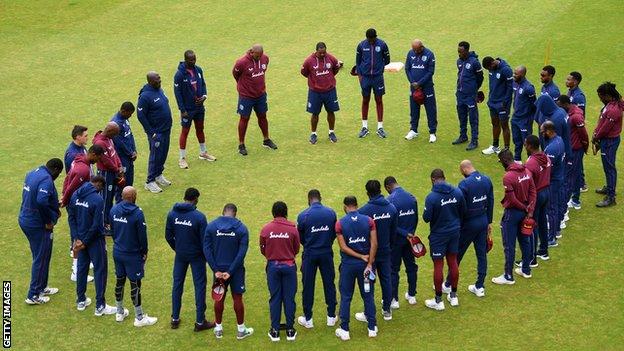 West Indies and England players have both paid tribute to legendary batsman Sir Everton Weekes, who died on Wednesday aged 95.

Windies players held a minute's silence and are wearing black armbands on the third day of their intra-squad warm-up match at Old Trafford.

Flags are also being flown at half mast at the ground in Manchester.

England players are also wearing black armbands on the second day of their internal match in Southampton.

Weekes is the only man to have scored five consecutive centuries in Test cricket.

He was one of the famous 'Three Ws', alongside Sir Clyde Walcott and Sir Frank Worrell.

Weekes' batting average of 58.61 is the 10th highest of all batsmen to have played at least 20 Test innings.

Meanwhile, the England and Wales Cricket Board has announced cricket will go #RedforRuth on Saturday, July 25 - the second day of the third Test against West Indies - to support the work of the Ruth Strauss Foundation.