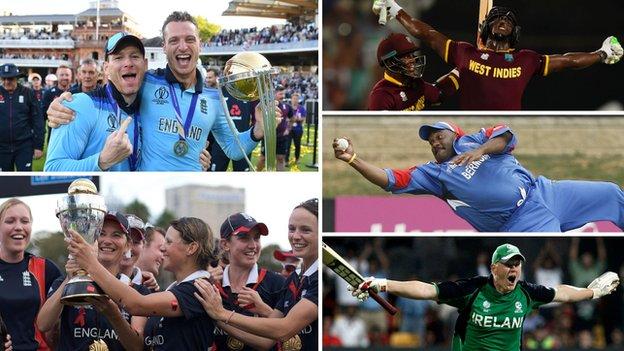 As the International Cricket Council opens up its archive from global tournaments of yesteryear, BBC Sport has compiled a list of 20 iconic moments and matches.

Pick up to three of your favourite memories from those listed below.* Once the vote closes, we'll publish video from the three most popular, together with analysis and memories from the Test Match Special team.

Enjoy your stroll down memory lane and feel free to add your own memories at the bottom of the page.

* After you have voted once, click 'Vote Again' to repeat the process.

The first World Cup final was 60 overs per side - imagine how long that would take now!

This was one of the biggest World Cup shocks in history.

West Indies were looking for a third successive title while India were appearing in their first final.

Despite being bowled out for 183, Kapil Dev’s side won by 43 runs thanks to three wickets apiece from Mohinder Amarnath and Madan Lal.

Many credit this victory as being the catalyst for India’s obsessive love affair with the sport.

The first World Cup to be played outside England and also the first of Australia’s five World Cup successes.

Captained by Allan Border, Australia posted 253-5 in the final and despite losing Tim Robinson first ball, England were on track thanks to Mike Gatting’s 41 and Allan Lamb’s 45.

But when the former fell reverse-sweeping the part-time bowling of Border, England's chase fell away and they ultimately fell short with Australia winning by seven runs. 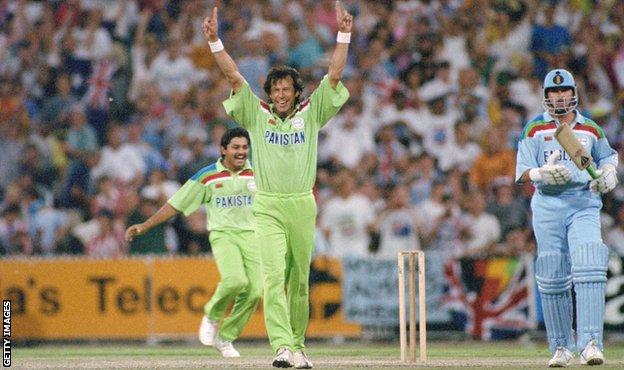 Nobody gave Pakistan a chance. They would, said captain Imran Khan, have to fight like cornered tigers to have any chance against England.

Chasing 250 to win, England recovered from losing Ian Botham for a duck and slipping to 69-4 with a 71-run stand between Lamb and Neil Fairbrother.

With Pakistan’s hopes slipping away, Imran turned to his main pace bowler Wasim Akram and the left-armer removed Lamb and Chris Lewis in successive deliveries.

One of the all-time classics. With South Africa needing just nine to win, Lance Klusener hit Damien Fleming for two fours from the first two deliveries of the final over.

He then drilled to mid-on and turned down the single. He repeated the shot next ball but this time ran… his partner Allan Donald was ball-watching at the non-striker’s end resulting in a comical run out and a tie.

Australia progressed to the final after beating South Africa in the sides’ previous match in the Super Sixes.

Waugh’s men went on to win the trophy, and the following two World Cups…

Many still cannot fathom how England lost this one, a Champions Trophy final In the autumnal setting of late September at The Oval.

England scored 217 thanks to Marcus Trescothick’s 104 and West Indies looked down and out at 147-8, but an unbeaten stand of 61 between Courtney Browne and Ian Bradshaw guided Windies home.

It wouldn’t get any better for England in subsequent Champions Trophy events either...

Yeah, it was against the Netherlands, but so what - this was special from South Africa’s Herschelle Gibbs… the man Steve Waugh said had dropped the World Cup when spilling a catch in the 1999 edition (this story has later been denied by Waugh, but let’s not let that stop us!). 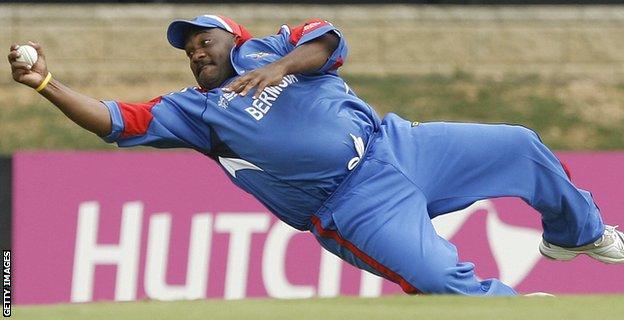 Weighing in at 20 stone, Bermuda’s Dwayne Leverock was the heaviest player at the 2007 World Cup.

That, however, didn’t stop him flying through the air and taking a stunning one-handed catch to dismiss India’s Robin Uthappa.

It was a moment that gave club cricketers all around the world inspiration. Don’t forget Leverock’s celebratory jig too. That was just as impressive.

Hat tricks are special, but four in four balls? Superb? Ridiculous? You decide, but whatever word you pick, it was certainly memorable.

With South Africa only needing four to win, Lasith Malinga removed Shaun Pollock and Andrew Hall with the last two balls of the 45th over. He then removed Jacque Kallis and Makhaya Ntini with the first deliveries of the 47th over to leave the Proteas nine down.

Sri Lanka’s bowling attack in the 2007 World Cup final contained three of the game’s greats - Chaminda Vaas, Lasith Malinga and Muttiah Muralitharan - but it was no match for a run-hungry Adam Gilchrist on a memorable evening in Bridgetown.

Gilchrist’s 149 off 104 balls helped Australia to a third World Cup title in a row and, we later found out, was all down to a squash ball inside his glove which relaxed his hands and helped him turn round a terrible run of form at the best possible time.

Ok, if you’re not accepting Gibbs' achievement because of the opposition, you must surely admit Yuvraj’s one-man demolition of England’s Stuart Broad was pretty special.

Like we said earlier, it’s a rare feat, so to do it against a bowler of Stuart Broad’s quality (he’s got 728 international wickets across all three formats, remember) is pretty ‘wow’. 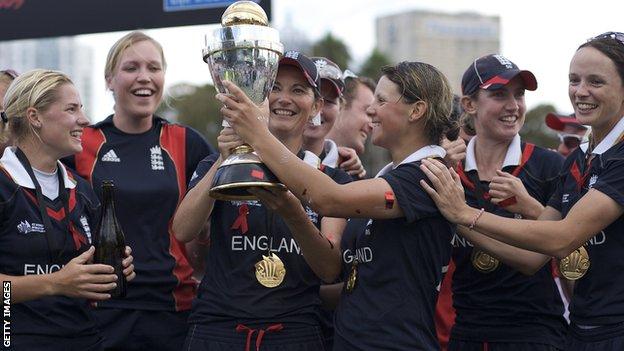 Having won the 1973 and 1993 editions, England ended a 16-year wait for their next trophy with a four-wicket win over the Kiwis in Sydney. Chasing 167 to win, England won with 23 balls to spare largely thanks to an opening stand of 74 between Sarah Taylor and Caroline Atkins.

Could it get any better?

After coming up with the T20 format, it was only right that England won the inaugural competition, right?

Chasing a modest 86 at Lord’s, Charlotte Edwards’ side won with 18 balls to spare with Sarah Taylor top-scoring with a 32-ball 39.

A special mention must go to Katherine Brunt, too, for taking 3-6 from her four overs.

Any England victory over Australia is pretty sweet but to do it in a major final with three overs to spare? It doesn’t get much better than that.

England were massive underdogs going into the tournament but stumbled on a winning formula when they selected Kieswetter and Michael Lumb to open the batting after being impressed by the pair in a warm-up game against the Lions.

Sachin Tendulkar and Andrew Strauss both scored classy centuries but, quite remarkably, 37 one-day internationals have had a higher aggregate score than this one.

Few, however, could match the drama of the closing overs as Tim Bresnan, Graeme Swann and Ajmal Shahzad saw England match India’s total.

England aren’t exactly unaccustomed to a shock defeat at a World Cup tournament but this is one they will still be having nightmares about now.

The flame-haired right-hander was dismissed with his side needing just 11 to win with 11 balls left but they got home with five deliveries to spare for a famous World Cup win.

No-one likes to see a rain-affected final but the weather at Edgbaston led to a classic. In a 20-over game, India scored 129-7 before England slipped to 46-4.

Eoin Morgan and Ravi Bopara put on 64 to give the hosts hope of their maiden 50-over title but Ishant Sharma removed the pair in successive deliveries as England fell five runs short.

If you go into the final over defending 18, you’d expect to win the majority of the time, right?

Even more so with Ben Stokes bowling.

But it wasn’t to be on this occasion as Carlos Brathwaite hit four consecutive sixes to give Windies their second World T20 title and leave England on their knees.

Groundstaff are probably still looking for a couple of those sixes now.

Was this the greatest match in women’s cricket in this country?

In front of a sold-out Lord’s, Heather Knight’s side picked up their fourth World Cup title with an edgy nine-run win over India.

The celebrations lasted long into the night.

Do we really need to justify this one? 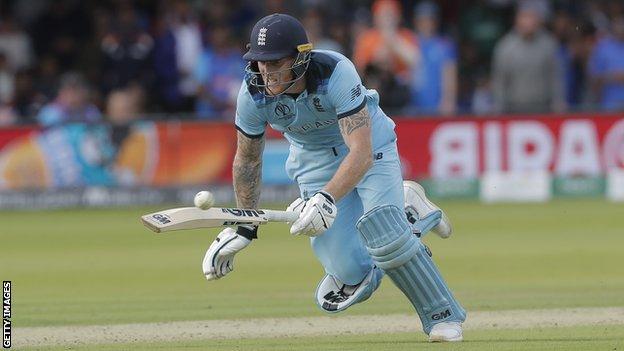