For the first time in 18 years, Australia will head back down under with the Ashes in their luggage.

By winning at Old Trafford, they went 2-1 up with one match to play to ensure at least a drawn series, which is all the holders require to retain the urn.

On the one hand, England may count themselves unfortunate. If it had not been for time lost to rain in the second Test at Lord's, they probably would have won.

However, they were soundly beaten in the first and fourth Tests and needed one of the all-time great innings from Ben Stokes to give them victory in a third Test they seemed certain to lose.

Here are the reasons why Australia keep possession of cricket's oldest prize and why England will not be doing a World Cup-Ashes double.

Let's start with the biggest difference between the two sides: the door-sized bat of Steven Peter Devereux Smith.

He is not just a batsman, but a relentless, insatiable, fidgeting run-scoring machine.

To have tortured England once, on their tour down under in 2017-18, is one thing. To do it again, after 18 months out of Test cricket because of his part in the ball-tampering scandal, lifts him to the sort of Ashes greatness that is surpassed perhaps only by Sir Donald Bradman.

Not since Neighbours arrived on TV screens has something Australian put together a greater body of work in the UK.

Smith's 671 runs is almost twice as many as anyone else - and he missed one Test with concussion. His lowest score is 82.

Even though the next Ashes series is more than two years away, England should be thinking about how to stop Smith from doing this again. He will almost certainly be their biggest obstacle to regaining the urn in 2021-22. 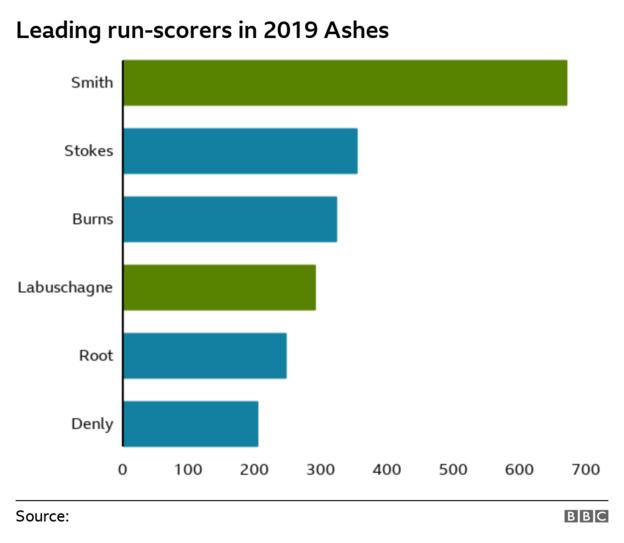 Taking nothing away from Smith's achievement, it is fair to consider how different the series might have been had England's James Anderson been fit.

Whether it was right or wrong for Anderson to have started the first Test, four weeks after tearing a calf while playing for Lancashire, is debatable, but the fact remains that he bowled only four overs in the series and not one delivery to Smith.

To be without your all-time leading wicket-taker, one of the greatest swing bowlers to have ever played the game, when trying to dislodge the planet's best batsman is like a golfer trying to play Augusta with only half of his clubs in the bag.

Whereas Australia always had three unrelenting pace bowlers to call upon, never giving the home batsmen a moment to breathe, England's attack could not provide the same constant threat.

For seven years, going back to when Andrew Strauss retired, England's top order has always contained at least one hole.

It has hurt them in away series, but at home they have scrapped enough runs together for the bowlers to get them out of trouble.

It potentially shouldn't have been a problem here - Australia's batting, bar Smith, has been similarly shaky.

There was more fight in the fourth Test, but on consecutive evenings, England still shipped three wickets for 30 runs, then two for none.

When it comes to staying upright, Bambi stepping on to a frozen lake has had more success than England's batting. It is the part of the team that needs the most urgent attention.

It can be argued that England have been outplayed in three Tests (Edgbaston, Headingley and Old Trafford) and were the better side in the other (Lord's).

They still managed to win at Headingley, were denied by the Lord's weather and had chances in the others, only to let the moment slip through their fingers.

After bowling Australia out for 284 in the first innings of the first Test, England found themselves 267-4 at the end of day two, with the opportunity to bat the tourists out of the game. They managed a lead of only 90.

Even then, Australia were 75-3 in their second innings, still 15 behind. Smith and Matthew Wade made centuries on the fourth day, moving the visitors out of sight with the help of some strange England tactics which included a curious lack of Chris Woakes' bowling.

At Old Trafford, Australia were 224-5 on a placid pitch when Smith was joined by captain Tim Paine. In a stand of 145 that took control of the Test, Paine was dropped twice and Smith, who went on to make 211, was caught off a Jack Leach no-ball on 118.

On such moments do matches, and series, hinge.

It has been coming...

England have a proud record in home series, having not been beaten since 2014. They haven't lost this one - yet - but Australia keeping the urn feels like a defeat.

However, just recently, those home wins have all come with caveats. The 4-1 win over India last summer was much closer than the scoreline suggested and was preceded by a 1-1 draw with Pakistan where England were thrashed at Lord's.

In the wins over South Africa and West Indies in 2017, England suffered a chastening Test defeat by both teams. They almost came unstuck against Ireland earlier this summer, too, winning after being bowled out for 85.

Put simply, England have managed to come through despite their weaknesses, but those frailties were ripe for exposure when an Australia team containing the world's best batsman and pace attack came to town.

England will deny that the focus on winning the World Cup has come at the detriment of the Test side, but plenty of evidence suggests otherwise.

Some definite improvements have been made. Archer has brought the pace lacking for so long, Leach looks like he could be a Test-quality spinner and the batsmen have latterly shown greater application.

But, for the moment, Australia are simply a better team.

406 comments
Back to top
unknown