When number 11 Jack Leach joined Ben Stokes at the crease in the third Test against Australia, England's Ashes hopes were all but over.

Joe Root's side - despite the fervent backing of a passionate Headingley crowd on a sun-kissed bank holiday weekend - were tottering on 286-9, needing an unlikely 73 more runs to complete their highest run-chase in history and prevent Australia from wrapping up a victory that would see them retain the urn with two matches to spare.

Fans were convinced defeat was looming.

Realistically, England's only hope of winning rested on the shoulders of all-rounder Ben Stokes.

He, of course, has history in playing match-winning innings - most famously his heroic unbeaten 84 in the World Cup final in July.

After clubbing a couple of sixes off Australia spinner Nathan Lyon, people began to wonder.

More incredible strokeplay from Stokes followed as he hit boundaries to all parts of a raucous Headingley, while also protecting Leach from the majority of the strike.

Something special was brewing...

The runs kept coming and the excitement kept growing for England fans.

The support act for the Stokes show was Leach, who defended stoutly - in between cleaning his glasses. 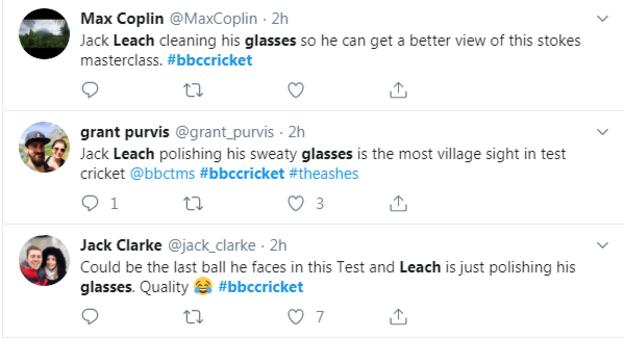 It was a fine move by Leach who was writing his own chapter in Ashes folklore - and unwittingly earning himself a lifetime's supply of gigs in the process...

It was gripping and tense. The nation was holding its collective breath.

Especially when Leach survived an lbw review by Australia and escaped being run-out when Nathan Lyon fluffed his lines...

Stokes should have been given out lbw too - but Australia had already wasted their reviews.

Amid almost unbearable tension and with England needing two to win, Leach collected his first run - off the 17th ball he faced - with a scampered single.

Then Stokes smashed the next delivery from Australia fast bowler Pat Cummins through the covers to complete a remarkable turnaround and one of the England's greatest victories. 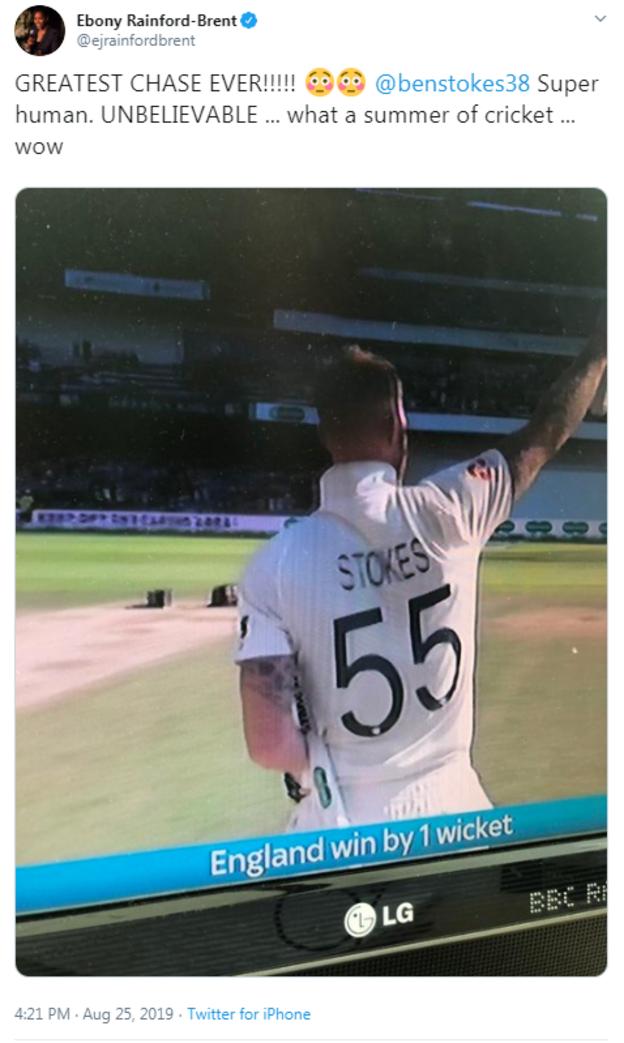 Some cricketing legends were quick to offer their congratulations. 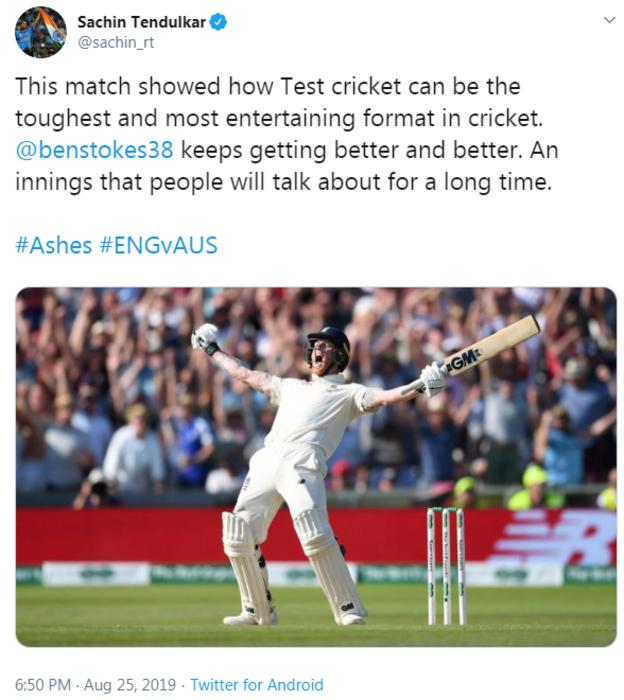 And it didn't take long for England fans to update the Ashes history books via Wikipedia... 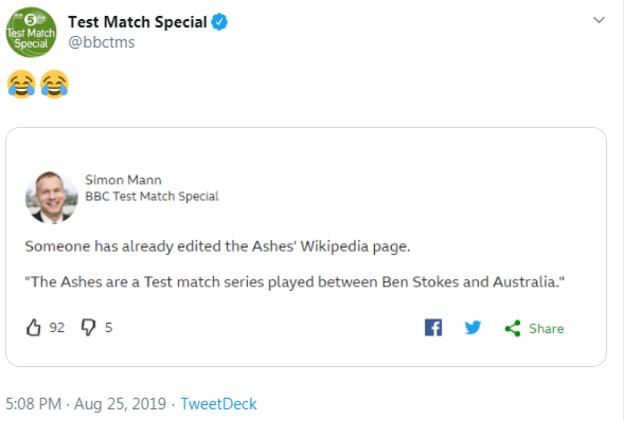 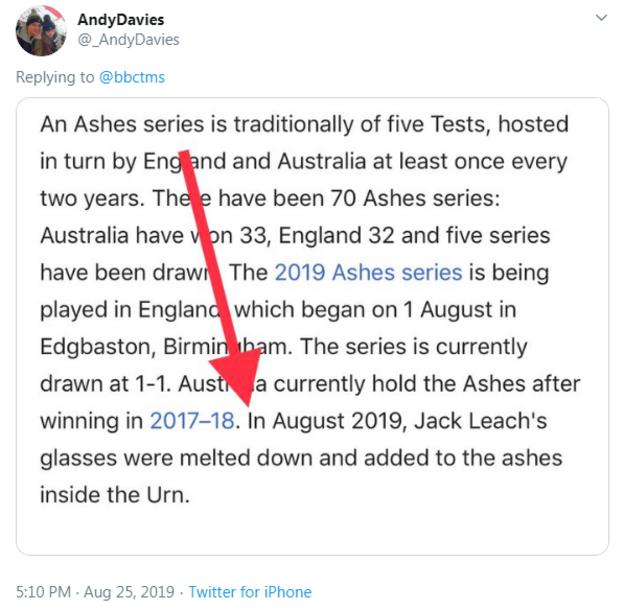 Some were in no doubt that a knighthood beckons.

And England bowler Stuart Broad gave us a snapshot from inside the dressing rooms of how Stokes himself was feeling. 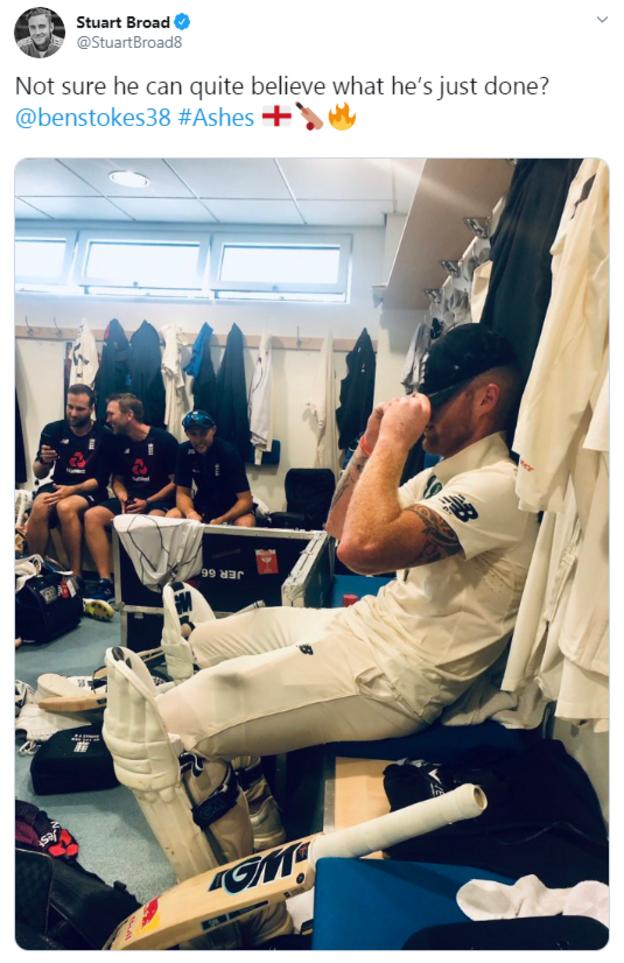 But of course, just like in the World Cup final, England bowler Jofra Archer had predicted it all along.