Legendary Australia leg-spinner Shane Warne has been named head coach of a Lord's-based London men's side for the inaugural season of The Hundred.

The 49-year-old is seen as one of the best spin bowlers in cricket history and took 708 wickets in 145 Tests.

Former Australia women's coach Lisa Keightley will take charge of the women's side based at the ground.

She is the first female coach named by any of the franchises for the 100-ball format, which debuts in 2020.

The London-based side will be headquartered at Lord's and compromises of the Marylebone Cricket Club (MCC), Middlesex, Essex and Northamptonshire.

Warne is the third head coach of male sides to be named, alongside Andrew McDonald for Birmingham and Simon Katich in Manchester.

A fourth Australian, Darren Lehmann, is set to be appointed to run the Leeds-based team.

"The opportunity to coach in a brand-new tournament and work with modern-day players is something that I will really enjoy and I am looking forward to the challenge," Warne said. 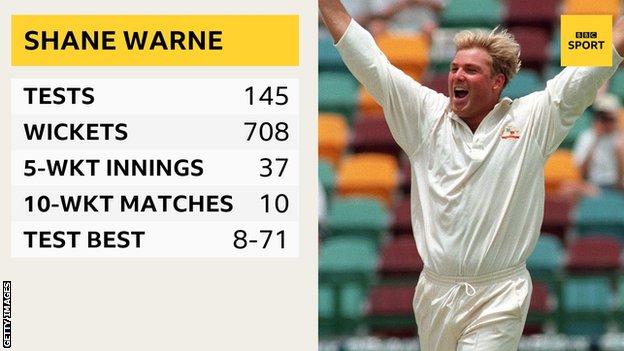 "This tournament will unearth some heroes and hopefully some future World Cup stars for England and other countries."

Warne is renowned as one of the best leg-spinners ever to play the game - only former Sri Lanka off-spinner Muttiah Muralitharan has taken more Test wickets - while he was the second-youngest bowler to take 300 wickets and was named in Wisden's All-Time Text XI.

He has limited overs coaching experience having led the Rajasthan Royals to victory in the inaugural Indian Premier League in 2008, when he also captained the side.

Warne was part of the Australia side that won the 1999 Cricket World Cup, but missed out on winning the 2003 title after failing a drugs test the day before the tournament started.

"I love the concept of The Hundred and it has grabbed my attention in the same way the IPL did," added Warne.

"We built a team from scratch with a diverse range of players from different backgrounds and ages and I can't wait to build the same mix of players to entertain the fans who come down to Lord's for The Hundred."

In 1998 Keightley, 47, became the first female player to score a century at Lord's while playing for Australia and was the first female coach of the Australia Women's team, while she has also spent time as head coach at England Women's academy.

"Over the last few months we have been determined to bring the best head coaches on board to lead our teams for The Hundred," MCC chief executive Guy Lavender said.

"Shane Warne has been closely linked to the home of cricket for many years and will bring his undoubted cricketing prowess, as well as his IPL-winning coaching experience. Lisa Keightley is an exceptional coach who will bring her strong track record to our team.

"We have two world-class coaches that we believe will be an excellent combination and who we are thrilled to be working with."

The Hundred, the England and Wales Cricket Board's new format of the game, will be a white-ball competition with 100 balls per innings - with a change of ends after 10 balls and bowlers bowling five or 10 consecutive balls.

The player draft for The Hundred will take place in October - the first time any major British sport has had a draft.