A few months ago the World Cup wasn't even on the radar of England's new bowling star Jofra Archer. The Barbados-born paceman wasn't eligible to play.

But on Sunday, the 24-year-old found himself charged with the responsibility of bowling a super over in the World Cup final for England against New Zealand at Lord's.

Yet he might just have predicted it all. In true Nostradamus style.

The bowler's old tweets seemed to foresee the dramatic events we witnessed on Sunday - as England won after the most thrilling climax - with spooky accuracy.

He also knew that, one day, England would send the nation into a nervous frenzy as the drama unfolded at Lord's...

We know how you feel, Jofra!

A year later, the then 19-year-old even knew what was coming - predicting a super over.

A six-week World Cup came down to this.

New Zealand had to score 16 from six balls to win the tournament. Did Jofra know that all along? This tweet from 2013 is again uncanny...

Playing in just his 14th international match, Archer was the one chosen by England captain Eoin Morgan to bowl the crucial six balls.

Archer looked calm and composed while the rest of us were shaking, too nervous to function normally.

Again, it was one of the bowler's old tweets that told it best...

England sent out Stokes and Buttler to bat. Lord's roared in anticipation.

The duo stayed calm. They hit two boundaries on their way to posting 15-0 from their six balls.

The drama had everyone gripped. Cricket was gaining new fans. For others it was too much...

After all that had gone before, the final over was never going to be easy.

A wide from Archer increased the English doubts and made the Kiwis believe. Then a huge six from batsman Jimmy Neesham. Was it going to be agony for England?

But Archer wasn't done yet and neither were England. He corrected his lines.

New Zealand needed two to win from the final ball. One run would not be enough for them.

Archer bowled full. Batsman Martin Guptill pushed into the deep. Lord's held its breath. The batsmen turned for the second run. This is it. Here comes the throw. GONE!

Even the most experienced of players, and cricket lovers who thought they had seen it all before, did not know what to do.

Laugh, cheer or cry? Maybe all three at once. 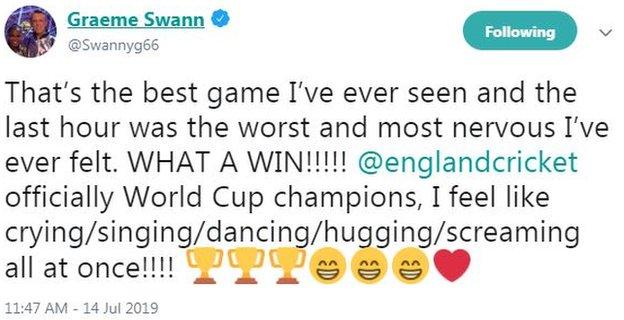 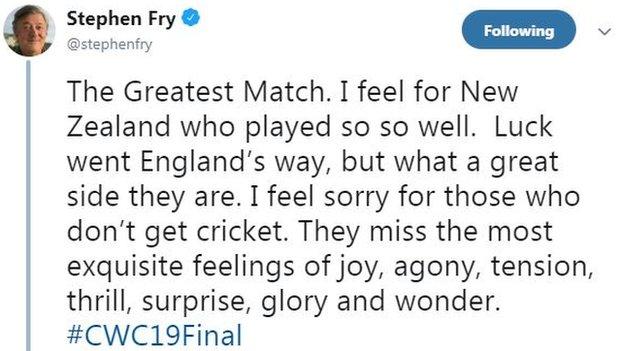 For New Zealand, though, it was the agony of defeat in one of the most painful ways possible.

Let's rewind - how did we get to the super over?

It was the most incredible finish cricket - perhaps all sport - has ever seen. And it concluded a match that had absolutely everything.

It had us all gripped, nervously watching through our hands or from behind sofas with hearts thumping in our chests.

Nerves were jangling throughout the day as England edged closer and closer to their target of 242, which looked so distant when England slipped to 86-4. 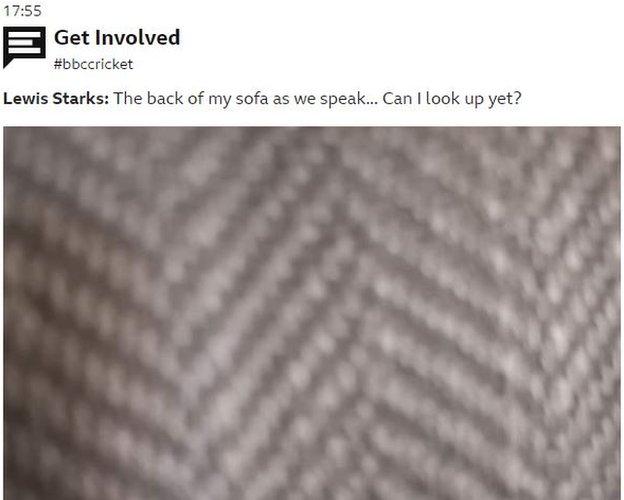 A truly remarkable ending took its first twist when, in the penultimate over, key England batsman Stokes was caught on the boundary by Trent Boult - but there was a 'catch'.

Boult had inadvertently stepped on the boundary rope when grasping the ball. That meant, rather than Stokes having to slump back to the famous Lord's pavilion, six more runs were added to England's total and Stokes survived.

'My heart is jumping out of my chest'

England needed 15 from the final over to win. For Stokes, this was his chance of redemption. He has had difficult times on and off the field in recent years.

In 2016 he was the bowler hit for four sixes by Carlos Brathwaite in the final over of the World Twenty20 final as West Indies beat England. Sunday's final also came 11 months to the day since he was cleared of affray in court.

From the third ball of the final over, the all-rounder sent Lord's into delirium. He swept fast bowler Boult into the stands for six more. England needed nine from three balls.

Stokes then flicked two into the deep. It didn't look like being enough but as the throw came in, the ball hit the bat of the diving Stokes and deflected to the boundary.

It was the strangest of six runs, unlike any Lord's had seen. Unlike anything cricket had ever seen.

But despite those runs, two run-outs came next.

Nobody could believe it. After 100 overs, the teams could not be separated. The match was tied. A super over - the best of six balls - was needed to decide who would take home the trophy.

While journalists up and down the land checked the specific rules, fans drew parallels with some of English sport's other nail-biting moments.

At the same time, Roger Federer and Novak Djokovic were battling it out in a final-set tie-break across London. The way both events built to simultaneous crescendos was impressive. 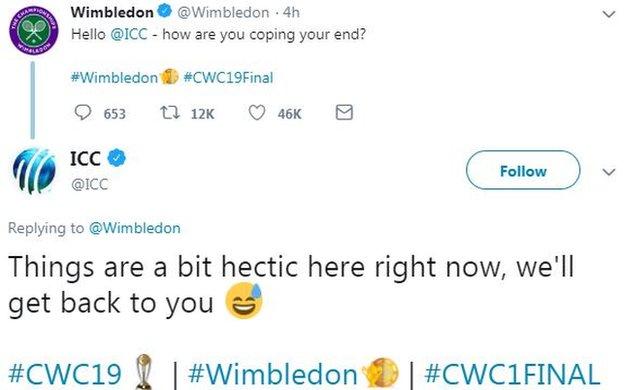 It was as if the sporting gods - and Archer - had planned it all along.