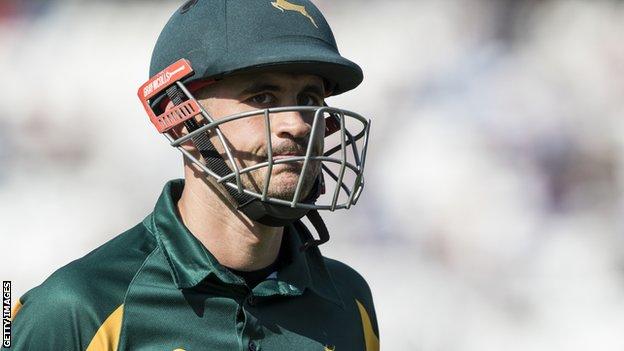 Alex Hales says he apologised to his Nottinghamshire team-mates after serving a 21-day ban for reportedly failing a recreational drugs test.

The batsman, 30, was dropped from England's World Cup squad after what was labelled an "off-field incident".

He returned for Notts on 6 May, though his international future is not clear.

"I got the point across that I'd not just let myself down, I let down family, friends and team-mates," Hales told a Nottinghamshire documentary.

"I had to get that off my chest. I wanted to tell the guys how I was feeling and then, just to finish it off, I just wanted to let them know that I was 100% focused on the cricket now."

Without Hales, England have reached the semi-finals of their home World Cup, where they will play Australia on Thursday.

Captain Eoin Morgan said Hales' withdrawal was because of a "complete breakdown in trust" between him and the rest of the squad, though coach Trevor Bayliss has backed him to return to the one-day team.

"I just wanted to apologise to them for everything that happened. I wanted to move forward and put those mistakes of the past behind me," Hales said of his return to the Notts changing room.

"I'm just trying to look at it in as much of a positive way as I can, and I just have to crack on and try to make the most of, hopefully, a few more years left in my career."