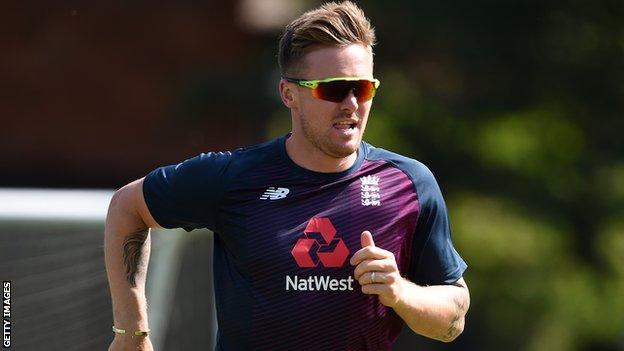 England will only reveal if Jason Roy is fit enough to face India in Sunday's World Cup match on the morning of the game at Edgbaston.

Opener Roy, who hit 153 in his last innings against Bangladesh, missed England's defeats against Sri Lanka and Australia with a torn hamstring.

"Jason is preparing to play provided he gets through Saturday's practice unscathed," said Morgan.

Roy has been central to England's white-ball successes at the top of the order and will have a fitness test alongside bowler Jofra Archer, who is also rated as touch and go with a side strain.

Morgan, however, cautioned that Roy will not play if the risk of further injury is too great.

"It depends on the significance of the risk," he said. "If it's going to rule him out long-term, absolutely not. If it's a couple of weeks, yes."

Because Pakistan beat Afghanistan in Saturday's match at Headingley, England will go into the game knowing a loss would take their fate out of their own hands.

Their final match is against New Zealand at Chester-le-Street on Wednesday.

The expectation is that Sunday's pitch at Edgbaston will suit India's spin bowlers and negate the effectiveness of England's aggressive strokemakers.

However, BBC cricket correspondent Jonathan Agnew told Morgan that England director of cricket Ashley Giles - a former Warwickshire player and coach - declared the pitch the best he has seen at this World Cup.

"That's great news if it is," said Morgan. "It'll just be down to performance then, and our best game lends itself to an expressive and expansive performance.

"It allows us not to fight our natural game and just play."

Speaking about the challenges of playing on low-scoring pitches in the World Cup, Morgan added: "It has been a different challenge but our performance hasn't been up to scratch.

"It will have to be tomorrow to beat India."

Kohli's side has been dominant in the round-robin group stage - winning all of their completed matches and being the only undefeated team left in the competition.

"Everyone is surprised," said Kohli. "We thought England were probably going to dominate in their own conditions.

"But I said at the beginning of the tournament, pressure is going to be a massive factor."

England have lost their last two matches, against Sri Lanka and Australia, while they were also beaten by Pakistan earlier in the competition.

After going into the tournament rated as the best one-day international side in the world, they now need to win their final two group stage matches, against India and New Zealand, to progress to the semi-finals.

If they slip up, that could allow Pakistan, Bangladesh or Sri Lanka to qualify at their expense.

Since their loss to Australia, England's Jonny Bairstow has criticised the media - suggesting journalists are "waiting for you to get that loss, so they can jump on your throat".

"Other teams have outplayed England on occasions, that can happen to any side," added Kohli. "England have to sort out their own issues I guess.

"The more basic you can keep things at a tournament like a World Cup, the better.

"The more you attach emotion or excitement to it the more you put too much pressure to a situation."

How can England dismiss Kohli?

The key with someone like Virat Kohli is he wants to stamp his mark and his personality on the game early on. So you have to make him hit where you want him to hit the ball.

When he first comes in you want to bowl as straight an off stump line as you can. Fourth stump or just outside off stump is the line you're looking to bowl, and early on you have a chance of nicking him off.

In one-day cricket he likes to hit through the off side, but if you bowl too straight he picks up runs through mid-wicket as well.

They key is to not allow him to get into a rhythm, he likes to get the ball away early on and feel he is on top of the bowling attack.

So it's about being tight with the off stump line, starving him of strike and making sure you don't allow him to exert his personality on the bowling attack.