India continued their World Cup dominance over rivals Pakistan with a rain-affected 89-run victory as a highly anticipated match came to a strange end at Old Trafford.

Pakistan, chasing 337, collapsed to 166-6 before a rain delay saw their target revised to another 136 runs required from 30 balls - a near-impossible task.

India, who have never lost a World Cup match to Pakistan, earlier posted an impressive 336-5, led by Rohit Sharma's fine 140 and 77 from Virat Kohli.

Only Mohammad Amir (3-47) impressed with the ball for Pakistan and their run-chase crumbled in front of a vociferous crowd, before the rain delay added further confusion.

This was the marquee game of this World Cup - a sell-out crowd, one billion TV viewers and more than 700,000 ticket requests, but it ended with Pakistan knocking the ball around in front of a half-empty stadium.

Play looked to be done when rain arrived at 18:20 BST, but it resumed 55 minutes later and with 15 minutes to go before the scheduled cut-off time.

India's batting lit up the morning but, with rain falling and Pakistan's innings crumbling, it was a tame end to a match that promised plenty.

Hardik Pandya took two wickets in two balls and Vijay Shankhar impressed on his World Cup debut, but there will be concern for India over the fitness of seamer Bhuvneshwar Kumar, who left the field with a tight hamstring.

Pakistan, who are ninth having won just one group game, face South Africa on 23 June, while India play Afghanistan on Saturday. 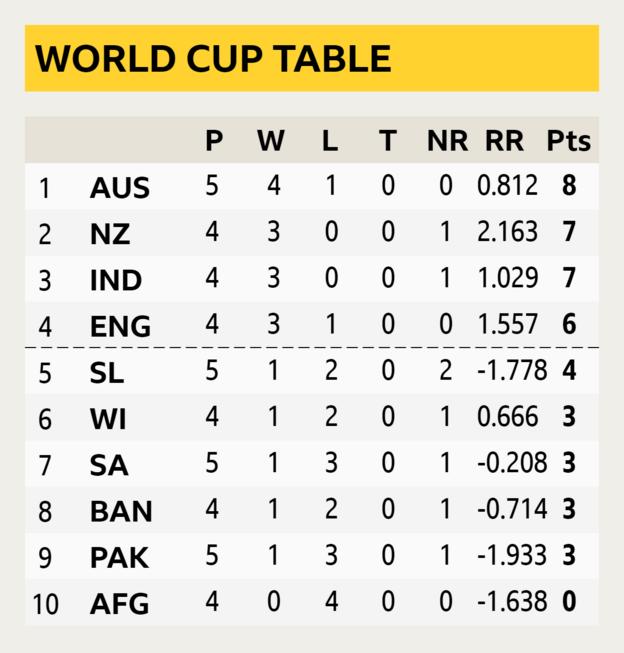 Pakistan captain Sarfaraz Ahmed might have allowed himself a wry smile when he won the toss and, under grey clouds, put India in to bat in conditions that looked ideal for seam bowling.

With the exception of Amir, the Pakistan seamers were wasteful. Short balls were pulled into the stands by Rohit; length was nudged and nurdled around the field.

KL Rahul, partnering Rohit in Shikhar Dhawan's absence, was stodgier. While Rohit struck out, hitting a poor Hassan Ali through the off side with panache, Rahul struggled for fluency.

This was the duo's first time opening together and it showed, with Rohit lucky not to be run out after a mix-up mid-pitch as Fakhar Zaman threw the ball to the wrong end from mid-wicket.

In front of a packed crowd, Rohit reached his fastest one-day half-century, taking apart Shadab Khan with 17 runs from the leg-spinner's first over.

It was almost a surprise when the 136-run opening partnership ended, with Rahul chipping Wahab Riaz straight to mid-off.

Rohit was imperious. He favoured the cut shot, carving Wahab and Hassan to the boundary, and was given a standing ovation as he reached his second century of this tournament with a clipped single.

Rohit was furious to be finally caught by Wahab at short fine leg as he tried to scoop, but Kohli continued.

Hardik Pandya hit out, with a top edge that flew over the keeper's head for six, while Kohli rotated the strike, clattering Amir back down the ground for four after reaching his fifty.

India did struggle in the final 10 overs in between the rain.

Pandya was caught at long-on, MS Dhoni edged behind and Kohli walked off, thinking he had nicked a hook shot to Sarfaraz.

However, the replay showed he had missed the ball - which Kohli, watching in the dressing room, berated himself about as India reached their highest total against Pakistan in England.

The result was summed up by the demeanour of each captain.

Sarfaraz, behind the stumps, could barely hide his annoyance at Pakistan's loose bowling and fielding. His opposite number Kohli berated himself when a cover drive found the fielder, competitiveness showing in every stretch of his body.

A chase that never was

Pakistan's chase was more of a crawl. Needing to go at 6.74 an over, they never looked as though they would come close to India's total, even before the anti-climactic ending.

They hit just six boundaries in the opening 10 overs and struggled to impose themselves. Bhuvneshwar and Jasprit Bumrah bowled tightly, Bumrah confusing the batsmen with his angled deliveries, but it was Shankar who took the first wicket.

With Bhuvneshwar leaving the field four balls into his third over, Shankar replaced him - and his first delivery trapped Imam-ul-Haq on the crease lbw.

There were moments that hinted at a comeback. Fakhar Zaman targeted Pandya, flat-batting him through cow-corner, and wrist-spinner Kuldeep Yadav was slogged to the boundary rope by the same batsman in the middle overs.

But there was no partnership, no ability by Pakistan to rotate the strike. From a comfortable, if non-threatening 117-1 in the 24th, they lost four wickets in three overs.

Babar Azam was bowled by a fine, fizzing delivery from Kuldeep, while nine balls later Mohammad Hafeez holed out at long-on off Pandya.

When Pandya bowled Shoaib Malik with his next delivery, Pakistan were in disarray even before the rain arrived.

While the majority of the crowd would have gone home satisfied - and without seeing the final five overs - it was a flat ending to a match that promised so much.

'Rohit was outstanding' - what they said

India captain Virat Kohli: "Rohit's knock was outstanding but to get to 330 you need a team effort and that is exactly what happened.

"Rohit is such a good ODI player, when he gets to 70 he is unstoppable. It allows me to come in and play in a certain role, the guys are playing their roles nicely.

"Kuldeep is a wicket taker, a longer spell helped him, he was getting rhythm and the ball to get Babar Azam was brilliant. It was a very important moment in the game."

"We had a plan to bowl in the right areas and pitch it up but we didn't hit the right areas. We didn't capitalise on winning the toss and conceded too many runs.

"The ball was turning, spinning. India played very well in the middle of the innings. We lost so many wickets in two or three overs and that is what cost us the match."

BBC cricket correspondent Jonathan Agnew: "India can now celebrate their victory. For Pakistan it is now a worrying state of affairs. The odds are this has finished their World Cup."

Former England spinner Graeme Swann on the decision to resume the match with Pakistan needing 136 off 30 balls: "They [umpires in the middle] are three intelligent men who get the game, this is bad for the game to make a farce of itself for rules' sake.

"I can't see any positive reason for going back out there. Oh cricket, stop shooting yourself in the foot.

"In the two dressing rooms India would say we don't mind going out, but it's humiliating for Pakistan."