A record third World Cup match was abandoned because of rain as Bangladesh's game against Sri Lanka was called off without a ball being bowled.

With persistent rain falling in Bristol, the match - due to start at 10:30 BST - was called off shortly before 14:00.

Sri Lanka's game against Pakistan at Bristol on 7 June was also washed out.

"We put men on the moon so why can't we have a reserve day?" said Bangladesh coach Steve Rhodes.

"I know that it would have been difficult, but we have got quite a lot of time in between games, and if we have got to travel a day later, then so be it."

The previous highest number of abandoned games in a World Cup was two, in 1992 and 2003.

Just 7.3 overs were possible in the match between West Indies and South Africa at Southampton on Monday.

Only the semi-finals and final have scheduled reserve days.

The ICC's head of events Chris Tetley told BBC 5 Live that scheduling reserve days for each stage of the tournament would "inevitably extend the length of the event, which isn't necessarily something that people want".

"The event would have a much greater impact on the domestic summer for cricket in the UK because we would be blocking out venues for a longer period of time," he added.

"The match schedule would need to have been drafted right at the outset with reserve days in mind.

"We obviously can't contemplate introducing reserve days midway through the tournament, it's not something we can do on the fly, it's something that needs to have been planned well in advance."

"There is a lot of frustration for all teams - coming to the ground and not playing is disappointing," said Bangladesh captain Mashrafe Mortaza.

Rain is forecast at Taunton on Wednesday, when Australia play Pakistan, and also on Thursday at Trent Bridge, where India face New Zealand.

The forecast is better for England's meeting with West Indies at Southampton on Friday.

With both sides taking a point from Tuesday's wash-out, Sri Lanka move up to fifth in the table and Bangladesh climb to seventh. The top four teams qualify for the semi-finals.

Sri Lanka seamer Lasith Malinga will fly to Colombo for his mother-in-law's funeral, but is expected to return for Saturday's game against Australia at The Oval.

Mortaza said: "It is a do-or-die match for us and we will need everyone. We have to play hard and let's see what happens." 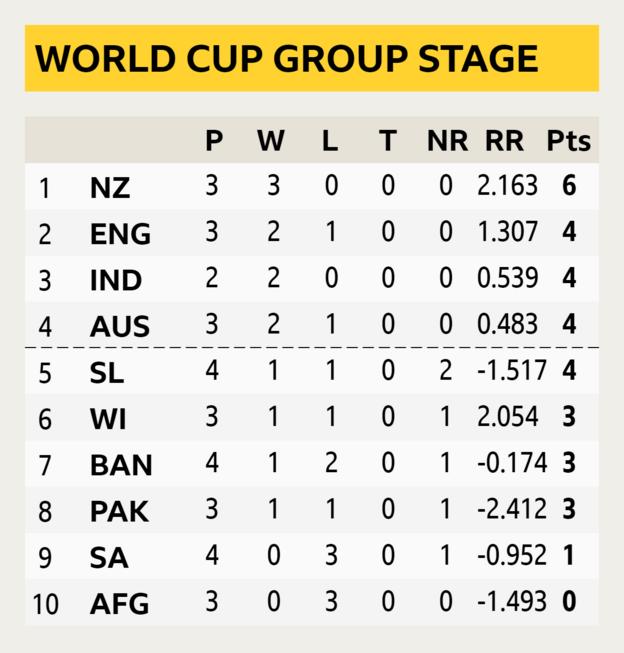