South Africa's chances of qualifying for the World Cup semi-finals were dented when their match against West Indies was rained off.

The Proteas, who lost their first three games, reached 29-2 in the 7.3 overs possible in Southampton.

They collected their first World Cup point but face a struggle to finish in the top four in the group stage.

"We are in a bad position but it's our own fault," said South Africa captain Faf du Plessis.

"We haven't played our best cricket so far and we need a solid performance to get the team's confidence up."

Only 40 minutes of play were possible before persistent rain forced the players off. Play was finally abandoned at 16:15 BST.

Sheldon Cottrell had Hashim Amla taken at slip for six and Aiden Markram caught down the leg side for five in claiming figures of 2-18.

West Indies skipper Jason Holder said: "We had a really good start again with the ball. Sheldon was excellent again with the new ball. It was unfortunate that the weather came."

This was the second match of the World Cup to be abandoned because of rain, following the wash-out between Pakistan and Sri Lanka on Friday.

Rain is also forecast on Tuesday at Bristol, where Bangladesh meet Sri Lanka, and on Wednesday at Taunton, where Australia play Pakistan.

West Indies face England at Southampton on Friday, while South Africa take on Afghanistan at Cardiff on Saturday.

West Indies all-rounder Andre Russell missed Monday's game with a knee injury, but Holder said: "We are hoping he pulls up all right. I guess it is a blessing this game is over and we can look forward to the game against England." 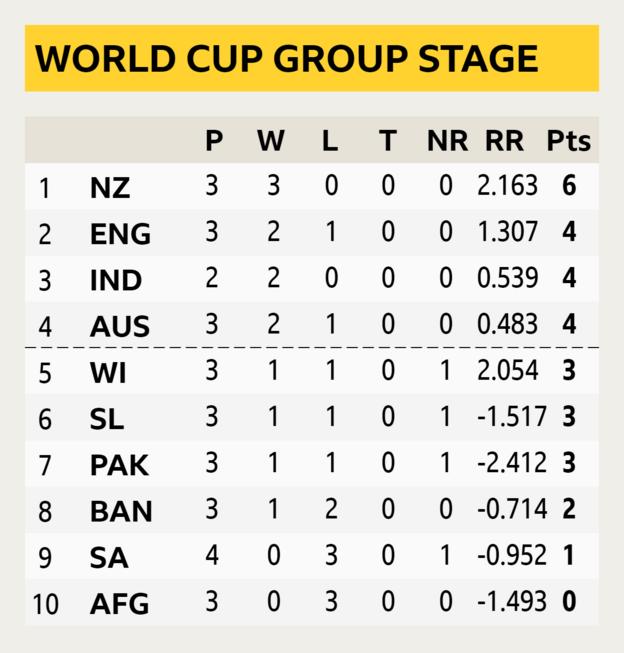