England piled on their highest World Cup total in a 106-run defeat of Bangladesh that got their bid to lift the trophy for the first time back on track.

The hosts amassed 386-6 in Cardiff, thanks mainly to Jason Roy's powerful 153, the second-best score by an England batsman in the competition.

Jonny Bairstow made 51 and Jos Buttler an action-packed 64, but a hip injury sustained when batting prevented Buttler from keeping wicket.

If that was a small negative in what was a mainly strong response to the defeat by Pakistan, so too was some of England's bowling, with Chris Woakes and Adil Rashid below their best.

Shakib Al Hasan took advantage with a doughty 121, an innings that made him the tournament's leading runscorer.

However, the required run rate was never under control and Bangladesh were bowled out for 280, with Jofra Archer and Ben Stokes each taking three wickets.

With two wins from their three matches, England go above Australia into second but remain behind New Zealand who top of the table on six points, after the Kiwis' seven-wicket win over Afghanistan.

Eoin Morgan's men now have almost a week to wait for their next game, against West Indies in Southampton on Friday.

Bangladesh, with one win and two defeats, are eighth in the 10-team table and play Sri Lanka in Bristol on Tuesday. 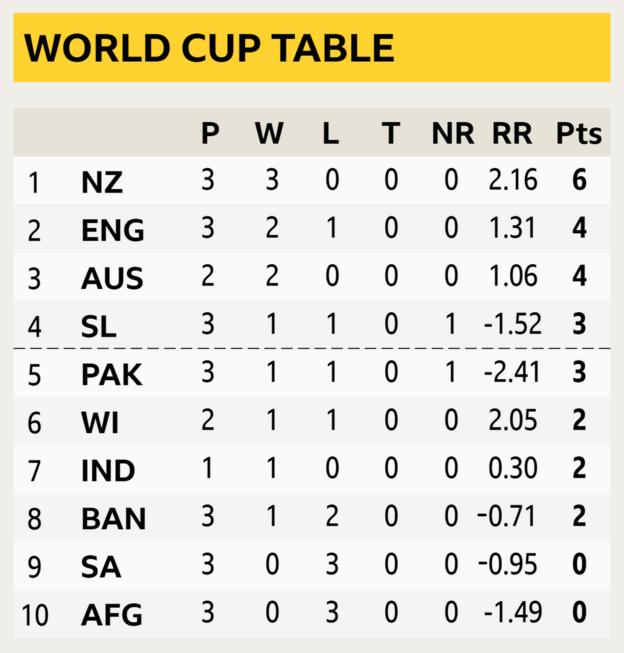 England entered the World Cup as favourites, but were chastened in the loss to Pakistan, a game in which they were visibly agitated as well as being sloppy in the field.

If expectations were beginning to weigh heavy, there were few signs on a sunny and blustery day in Cardiff. For the most part, this was much more like the England team that has climbed to the top of the world rankings.

Bangladesh had humbled England in their two previous World Cup meetings, most famously in Adelaide four years ago to condemn them to a first-round exit.

They are no longer minnows of the game, either. They were impressive in defeating South Africa and pushed New Zealand close.

Bar Shakib, they were disappointing here though. Giving away the opportunity to bat first on a true pitch, their bowling was toothless, fielding untidy and tactics muddled.

England reaped the benefit. Their batsmen exploited the unusual dimensions of the ground and, after Archer removed Bangladesh opener Soumya Sarkar in a spell where he touched 95mph, the chase was never on.

Roy of the runs

England's prolific opening partnership of Roy and Bairstow had been neutralised in the first two games as both South Africa and Pakistan opened with spin.

Bangladesh did the same and even though they restricted England to only 15 from the first five overs, they could not find a breakthrough.

Roy cashed in, firstly in a stand of 128 with Bairstow.

The Surrey right-hander played booming drives and powerful pulls for 14 fours and five sixes. He led the England approach of peppering the short straight boundaries and running hard when it went to the long square fences.

His celebrations for reaching a ninth one-day international hundred were delayed when he collided with umpire Joel Wilson, after which there was still plenty of time for him to become the first England batsman to make an ODI 200.

He fell after hitting three consecutive sixes, leaving Buttler to pick up the assault.

Though the Lancashire keeper sustained the injury that was clearly affecting his running, it did not prevent him from hitting four maximums, including one mighty blow into the River Taff.

Woakes and Liam Plunkett added late cameos, by which time England had already become the first team in ODI history to pass 300 in seven consecutive innings.

In an electrifying opening spell, Archer hinted at making short work of the Bangladesh batting.

When he clipped the top of Sarkar's off stump with one that nipped back, the ball flew over the boundary behind stand-in keeper Bairstow without bouncing.

After Tamim Iqbal miscued the similarly lively Mark Wood, the Tigers were 63-2, but a stand of 106 between Shakib and Mushfiqur Rahim gave their noisy fans, of which there were plenty, some long-awaited cheer.

Leg-spinner Rashid has been the leading wicket-taker in ODIs since the last World Cup, only to struggle in this tournament - his two wickets have come at an average of 71. With England only playing one spinner, he was preferred to Moeen Ali and endured another difficult day.

He was punished by Shakib, who favoured the leg side, but he at least had Mohammad Mithun caught behind after Plunkett had Mushfiqur snaffled at point, a double strike that sucked the life from the chase.

Shakib was also harsh on Woakes as he went past three figures, though as the left-hander tried to make an impression on the spiralling rate he was bowled by Stokes.

In the end, Archer returned to terrorise the tail and England's margin of victory was more than comfortable, yet there is still room for improvement.

'Roy is so intimidating to play against'

England skipper Eoin Morgan: "We knew we had to improve with the bat, we were outstanding and Jason got a good score.

"He's very intimidating to play against so the impact that has on our team is very significant.

"The majority of people will open with spin but there are always things to throw against us. Hopefully we can counter all the plans thrown at us.

"The bowlers were all outstanding, they are wonderful to captain."

On Jos Buttler's injury: "No serious concern with Jos at the moment. He didn't keep wicket as a precaution after he felt his hip, but it will be monitored over the next 48 hours."

Bangladesh centurion Shakib Al Hasan: "I am very happy with the way I played but we didn't start well with the ball and when they got the start, they capitalised.

"We need to pick ourselves up because there are plenty of games left."

"It was an edgy start but you've got to expect that after losing a match.

"It turned out to be a good toss to lose - if Bangladesh had batted first and got 280 it could have been a tricky chase."