Roy scored 123 off 85 balls and Root 102 off 97 as the tourists cruised to their 361-run target with eight balls to spare in Barbados.

Eoin Morgan made 65 and Jos Buttler sealed victory after Root holed out with the scores level.

He struck 12 of West Indies' 23 sixes - a record for an ODI innings - as they made their highest total against England.

However, Roy - who dropped Gayle on nine - rarely looked troubled as the number one ranked one-day team played with a controlled aggression to surpass the 350-3 they made against New Zealand at Trent Bridge in 2015.

It was the fourth highest chase by any side in ODI history.

Although it was an excellent wicket for batting, West Indies were sloppy in the field, with Roy and Root both dropped twice.

The second game of the five-match series takes place at the same venue at 15:00 GMT on Friday.

England's highest score in the recent Test series against West Indies - which they lost 2-1 - was 361-5 from 105 overs in the third Test.

They surpassed that in 48.4 overs in Bridgetown, with Roy's aggression at the top of the order laying the platform for victory.

Roy and Jonny Bairstow put on 91 for the first wicket before Bairstow was caught behind off Holder for 34, but Root rotated the strike from the start of his innings to keep England ticking along.

Roy reached his century from only 65 balls with a six back over off-spinner Ashley Nurse's head, before he was caught at short third man off leg-spinner Devendra Bishoo.

Morgan thrashed 15 runs off a Bishoo over to take the required rate below a run a ball, but he drilled Oshane Thomas to mid-off as England closed in on victory.

Root reached his century with his ninth four, only to pull a Jason Holder full toss straight to Nicholas Pooran at deep square leg.

Despite the batting, West Indies had their opportunities, with four catches going down and their bowlers conceding 13 wides.

Gayle was laboured in the opening stages of his innings and needed 35 more balls than Roy to reach his century.

Playing his first ODI since July 2018, Gayle was on nine from 32 balls when he was dropped by Roy - a tough chance at full stretch running round from point - and did not hit a boundary until the 15th over.

His half-century came from 76 deliveries, with 45 dot balls, but he needed only 24 more balls to reach his 24th ODI century, including four sixes out of the ground.

England's bowlers lost their lines as Gayle continually whipped them over the leg side. Mark Wood's seventh over went for 22, while Gayle and Darren Bravo hit four sixes in off-spinner Moeen Ali's final over. He finished with 0-85 off 10 overs.

Gayle shared a fifth-wicket stand of 64 with Bravo in only 7.4 overs and was well supported in the middle overs by Shai Hope, who also hit Moeen out of the ground.

Only leg-spinner Adil Rashid - who was not introduced into the attack until the 34th over, when Gayle had 98 - and Ben Stokes, with 3-37, were able to control the run-rate.

Gayle dragged a Stokes slower ball on to his stumps in the 47th over, but Nurse's unbeaten 25 from eight balls helped West Indies past 350. 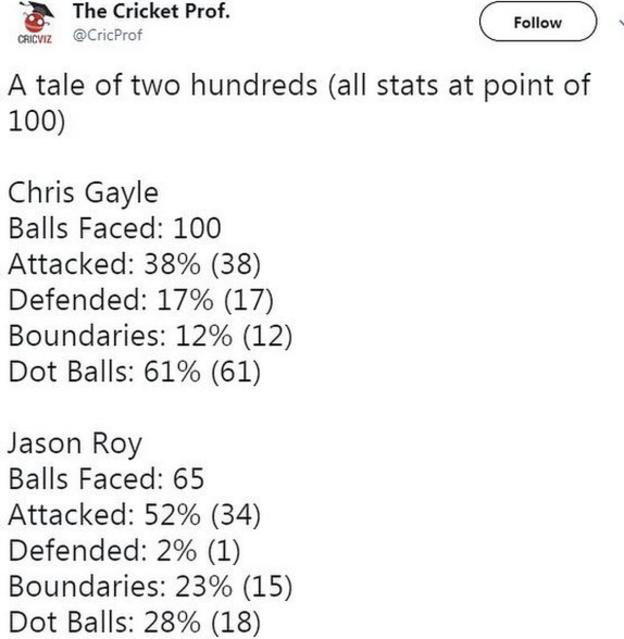 'We thought 361 was chaseable' - what they said

Man of the match Jason Roy on the BBC Test Match Special podcast: "I knew if I just put in some ground work early I could get a good start, then it was just a case of kicking on.

"Unfortunately I'm a bit disappointed getting out when I did because there was a big hundred there to be had and being there towards the end would have been a lot nicer.

"Test cricket has been my ambition for years and years. I've not shied away from that but it's just a case of biding my time and waiting for my opportunity."

England captain Eoin Morgan: "We thought 361 was definitely chaseable. We said at the halfway stage that it was game on.

"Jason and Jonny were brilliant and Jason got us way ahead of the game with that magnificent hundred.

"We don't take Joe Root for granted at all. We're extremely lucky to have him and to win in the fashion we did tonight, he played a big part."

West Indies captain Jason Holder: "With a side like England, if you put them down, they're going to make you pay for them.

"We're a little disappointed with the way we went about it in the second innings. The bowlers tried, we created chances but we just didn't hold them in the field."