James Anderson will be "irreplaceable" for England when he finally retires, according to fellow fast bowler Graham Onions.

Anderson, who has taken more wickets than any other fast bowler in Test history, picked up 4-33 to help reduce West Indies to 264-8 on the first day of the opening Test in Barbados.

"It's the same as how much Australia missed Glenn McGrath," said Onions.

"They're phenomenal bowlers who are greatly missed when they stop playing."

Anderson, playing his 146th Test, took his tally of wickets to 569 after bowling 24 overs, the most of any England bowler on day one.

The 36-year-old was particularly effective late in the day, taking three wickets with the second new ball as, from 240-4, the hosts lost four wickets for 24 runs.

His performance was all the more impressive give the omission of long-term new-ball partner Stuart Broad, with Sam Curran struggling after opening the bowling - returning 0-54 from his 12 overs.

"On days like today, you need someone like Anderson to stand up and he does it almost every single time he bowls," Onions, who played nine Tests for England, told BBC Sport.

"He puts the ball in the right areas and makes batsmen think. Against batters that are struggling to hang in for long periods of time, you back someone like him to put them under pressure and get them out eventually."

England's record run-scorer Alastair Cook retired at the end of last summer, and Anderson said in September that retirement could come "at any time".

"He'll either stop enjoying it or know he can't do it any more," said Onions, now a team-mate of Anderson at Lancashire. "I don't think he's anywhere near that yet."

When Anderson took his second wicket of the day, it meant that he and Broad had reached a combined total of 1,000 in Test cricket.

On the decision to leave Broad out, Anderson joked it is why captain Joe Root gets paid "big bucks".

"You've got one guy who's played 124 Tests but you have a really talented all-rounder in Sam Curran, and in that respect it shows how strong our squad is," Anderson said.

"I have played with Stuart for a long time and it's amazing to think we've taken that many wickets.

"It's shame that Stuart wasn't out there but hopefully he'll get a go at some stage on this tour. We are still pretty hungry to play.

"I've loved it today. While we're enjoying it, who knows how many we can take?"

'Anderson was heroic' - what they said

BBC cricket correspondent Jonathan Agnew: "That was great fun towards the end. It looked like the second new ball had more than the first. James Anderson was heroic."

Former England spinner Vic Marks: "Jimmy Anderson is a marvel. At 36, he's better than he's ever been. He's reeled off 24 overs and looked fresh as a daisy. Without him, Joe Root would have felt naked out there." 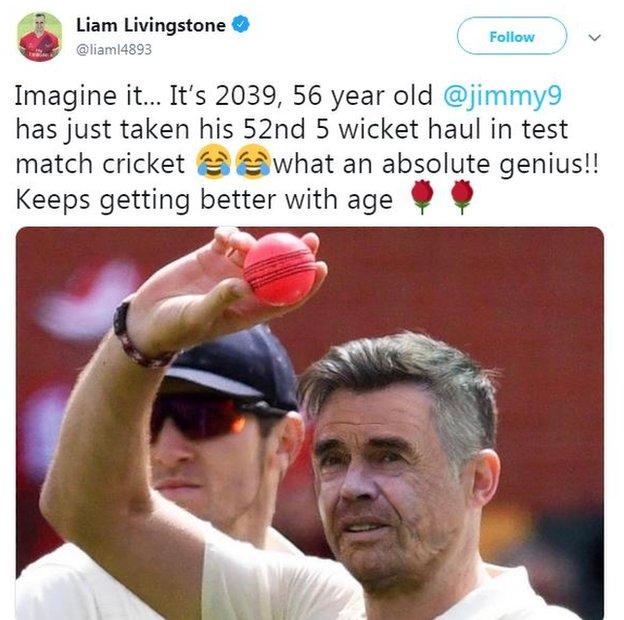 'Can we clone Jimmy?' - what you said

Aeron Nutley: Can we get on with cloning Jimmy Anderson please?

Mark Crossley: Will still be taking wickets with the new ball when he's a pensioner. Ludicrously good.

Shaf from Bedford: The day Jimmy leaves us will be like when Michael Jordan retired from basketball.

Paul Garnett: This James Anderson will make something of himself as a bowler I feel.