England wicketkeeper Jonny Bairstow says he has not accepted that his only way back into the Test team is as a specialist batsman.

He missed the first Test in Sri Lanka with an ankle injury, and replacement Ben Foakes kept his place for the second despite Bairstow being fit.

"I'm working on both my primary skills," said Bairstow, 29.

The third and final Test in Colombo starts on Friday, England having won the series with victory in Pallekele.

Foakes, 25, made a century on his debut in Galle, is averaging 76 with the bat in the series and has also impressed behind the stumps.

Asked whether giving up the gloves would be his likeliest way to regain his place, Bairstow said: "You don't want to accept that.

Bairstow averages 41 when he has kept wicket in Tests, and 27 as a specialist batsman. 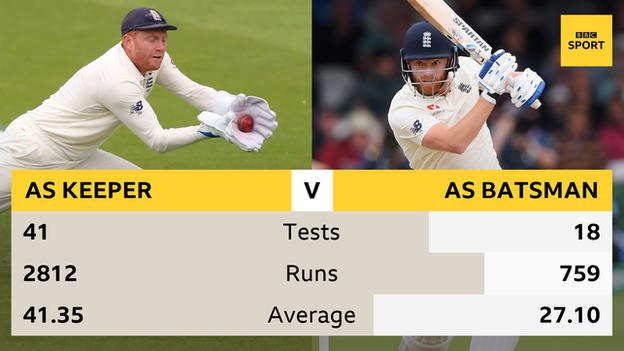 However, he averaged 34.31 in 2017 and is averaging 29.87 this year, having made three ducks in his five most recent Test innings.

Bairstow said: "The last two and a half years I've been in the team, and it was only three Tests ago I was in the top 10 batters in the world. And then you're not playing.

"Naturally, you're going to be disappointed, but it's about how you manage that disappointment, especially when you're around the group.

"You don't want to be going around sulking. If you're sapping the energy from the group, that's not a good thing."

Bairstow twisted an ankle playing football on 19 October, ruling him out of the final two one-day internationals in Sri Lanka and the opening Test.

He said he feared his tour was over, adding: "I thought I'd broken my ankle. Everything goes through your mind in those two or three minutes.

"I've not told everyone how bad I did it. We're well ahead of where we were going to be."

England's 57-run win in Pallekele on Sunday gave them an unassailable 2-0 lead in the series and secured a first triumph in Sri Lanka since 2001.

All-rounder Sam Curran, who played in the first two Tests, has a side strain and will be assessed on Wednesday.

Sri Lanka have called up the uncapped Nishan Peiris for Colombo as fellow off-spinner Akila Dananjaya will have his suspect bowling action assessed in Brisbane.

Dananjaya was reported during the first Test but, under ICC guidelines, was allowed to play in the second, when he took eight wickets.